While I'm still highly, frustratingly bitter towards the Sixers for not participating in the LAS VEGAS summer league of which Liberty Ballers will be attending, when news of Orlando Summer League rosters breaks, I still get a few tingles. Summer League is my jam. And with the Sixers in dire need of humans to take up roster spots (volunteering), at least 1-2 of these new guys could find themselves among our number next season.

So here's the roster, courtesy of Sixers dot com. The Orlando league starts next Monday with Vegas (!!!) the following week. 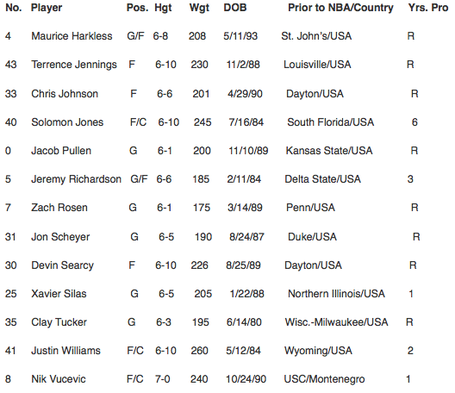 A few things after the jump.

- We heard that Arnett Moultrie will be sitting out summer league due to an ankle sprain. That's a bummer, but at least Moe Harkless will be getting in on the fun, wearing his confirmed #4 jersey that was stolen right off the back of Sixers legend Tony Battie.

- Guys I don't think have a chance of making the team: Devin Searcy, Chris Johnson, Clay Tucker, Justin Williams. Thanks for coming! (They'll probably all make the team and start)

- I like Zach Rosen and Jacob Pullen battling it out for the backup point guard spot. Jrue Holiday desperately needs to not be in games when they're up or down a whole bunch so give a dude a backup, please?

- I think Xavier Silas makes the team for sure.

- Nice to see Nikola Vucevic on the team after his unfortunate brick wall incident of a few months past -- I hope he's recovered. I wonder where Lavoy is? Maybe they just want to give him a break or could it be something about just having signed a contract? Dunno.

- Solomon Jones and Jeremy Richardson represent the OLD GUY SUMMER LEAGUE contingent. One or both of them could sneak onto the Sixers.

- If I had to pick a wild card, it'd be Terrence Jennings. He came into Louisville as a 4-star prospect and didn't really do a ton in 3 years at Louisville as Samardo Samuels' replacement. But he decided to turn pro after his junior year and now he's here. Great length (7'2.5 wingspan, 9'0 standing reach), super strong, pretty athletic, very solid offensive rebounding. That said, he's terrible on the defensive glass, has no footwork to speak of, zero basketball IQ, and a whole lot of unfulfilled hype. As far as undrafted free agents go, he's somebody I'd roll the very inexpensive dice on.