We last left you off at the UNLV Rec Center, where the SB Nation squad took the cake in a hard fought battle against ESPN TrueHoop in the biggest blogger basketball game north of the equator. You would think that after such an impressive and gritty (killer instinct was also involved) performance, the Liberty Ballers crew would have nothing left in them to continue on. You thought wrong, my Ater Majok fans. We battled back and marched forward with out Vegas adventures just to please you.

Even though we roll incredibly deep in Vegas, especially for a site whose team isn't even there, we were missing "The Godfather" for the next round of Summer League games. Since our tour guide Jordan just started a new job (call him for all of your Zappos.com needs - do you have these in a 12?), we were forced to navigate around Vegas all by our lonesomes. Somehow, some way, we found the Thomas & Mack Center and were ready for more basketball (or something like that).

Check out the end portion of our adventures after the jump.

While basketball was allegedly being played at UNLV during this time, the two incidents that became the highlights of the day were when I perfectly fielded an errant jumper while on press row, when Dave one-handed a bad pass during warm-ups (Renaldo Major got a kick out of it), and when Mike reminisced with Justin Holiday about their chat from the day before. After a few successful attempts to take stalker-like photos of Tyler Zeller and Michael Eric, we had about all the summer league we could handle for the day, but not before a rare cameo from Gonzaga legend Adam Morrison came strolling by with eyes wandering towards our adopted Liberty Baller, LJ Rotter from Mavs Moneyball. You could sense the romance a-brewin from just one of Adam's glances.

It took a while for us to pry LJ away from Adam, but we were finally successful and ready to grab some food. "Feed Dave" was one of the many themes this weekend ("Where's Dave?" is another) and feed Dave is exactly what we were going to do. What's Vegas most known for? Southern barbecue, of course!

Lucille's BBQ was next on the list but Lucille wasn't there, putting a dark cloud above the whole experience. Dave and LJ drank out of enormous jelly jars (I don't even like Jelly) while Mike and I engorged Irish nachos. It was already a wild party, could you believe we actually went out after this?

Let's just say the LB team didn't have the best luck gambling the first couple nights. Luck had to turn around at some point, right? We hit a casino, ready to run it into the ground.

On my last set of chips at the roulette table, i heard what could only be described as the voice of God (or Dave): "Manute Bol. Do it for Manute." After one of the most efficient spins I've ever witnessed, chips quickly found themselves on number 11 with various other numbers thrown in. The ball bounced around and around and finally came to a halt. "MANUTE!!!!!!" It was about time one of us actually won something.

Not only did I win some cash, but Mike was right there alongside me raking in some dough for himself. Were we VIPs after this? Just take a look at this picture of Mike and come up with your own conclusion. 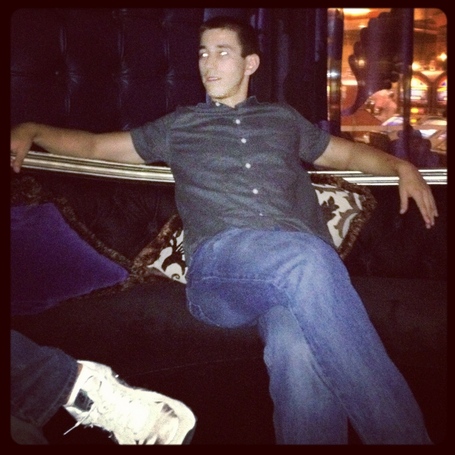 During this time there was possible talk about a timeshare in Cheyenne, Wyoming and other such banter that might have included Bubba Sparxxx and accordion dancing. Wild Vegas night conversations at bars!

The next morning it was time for blogger basketball part two. The TrueHoop guys didn't show, still heartbroken from the loss the day before. The LB squad and Conrad Kaczmarek came away with another big win against other bloggers from around the country. After almost blowing a 17 point 4th quarter lead, Mike ensured SB Nation would not take a loss. In what was eerily similar to Evan Turner's lay-up at the end of game 2 against the Celtics, Mike put the dagger on the other bloggers. With 15 seconds left (10 on the shot clock) I came up and set a foul-line screen to his right. Mike faked using the screen, getting his defender to bite and crossed left with a clear look at the basket. With a collapsing defender, Mike went up with his left and got the lay-up to fall. Victory, blouses.

The most underrated plays from this game came early in the first half courtesy of Jordan. After he hit a three at the top of the key, Jordan brought the ball up on a fast break and took a long-two in transition that swished right in. "What can I say? I'm BOSS." We may hate the Sixers taking long-two after long-two, but we'll do it all day long.

After hanging out at the SB Nation house pool, it was time for our paths to go in separate directions. Dave was already on a flight back to Boston and I was on my way to LAS to catch my plane back to Philly. Vegas Summer League 2012 was over for the unit of Liberty Ballers writers.

We'll always have singing "Call Me Maybe" into our summer league bananas, shocking Dave that we all knew Kanye's "New Workout Plan", Dave telling every single person (every girl) he saw that I'm his friend and I work in HR (what are your strengths and weaknesses?), me hitting my head on Jordan's mini-hoop at least 25 times, Mike doing Ron Burgundy-like vocal exercises before his interview with Angelo Cataldi at 5:30 AM local time, and Jordan checking out every groupie that was in the crowd (Jared Sullinger and Omri Casspi done well for themselves). That's how LB rolls.