You already got the backstory yesterday. Jordan, Tanner, Dave, and I are in Vegas for the Summer League and the Sixers are not. Thus, we have few things to actually "do". Ed Stefanski is around here somewhere so we're trying to draw and corner him into talking to us about scissors or something (we did!). Jacob Pullen and Justin Holiday are in town as well. They're probably dying to talk to us. But other than that, we're just hanging and eating Jordan's 'nanas.

Our story left off at me eating a banana. I'll take you through all (most!) of what has gone down since. If you don't care about us, you should really stop reading now. Seriously. There is no point to this post.

I'll go bullet points in the interest of my unbearable exhaustion and sore fingertips.

- Lotta basketball yesterday. Playing in basketball tournaments and watching them are entirely different beasts. Especially since half the time is spent trying to keep Dave away from Bobby Jackson, who refused to play Rob Kurz on principle. Watching large men bang into each other dangerously close to your face for hours on end can really drain a dude.

- The rest of the games were a blur, although Dave swore he saw the Rockets play three separate games. We're still rankled the Sixers passed on Donatas Motiejunas for the now bench-ridden Nikola Vucevic. We left to pick up Lisa Rotter, lead blogger at SBN's Mavs Moneyball, who needed a ride from the airport. We flailed about the airport until we found her and felt slightly less sausage-fest-y with a lady in the fold. It didn't take long to initiate her to the strange.

- After dropping luggage off at the spot (Jordan's mom is easily the MVP of Summer League), we drove around the Vegas strip for 103 Altuves. Jordan, despite being from Vegas, actually has no idea where or what anything is, so most of the night was spent at traffic lights. We did see a couple getting into a slapfight while the dude was driving. It was really disturbing. Spousal abuse sucks. Don't hit girls.

- The All-Star of the night really was Dave. This could easily just become a ballad to the night we finally really got to know the Dave Rueter we read about. "Once Dave is out, he's out", it's been said. Most strange passersby at The Mirage were accosted by a small, intentionally bald, Jerald Honeycutt fan with the following:

"Hey my name is Dave this is my friend Tanner, he's in Human Resources."

- After wooing the Fat Booty/Short Skirt/Sleeve Tattoo fanbase, Tanner and Dave purchased some cherry and lemon slushies that were playing at being alcoholic beverages. $1 apiece -- truly fine dining. They were horrendous and I kept pouring mine into Tanner's while he wasn't looking.

- The night after that turned into a vague maze of a batch of various things including Marty Jannetty, Ice Age, and Javale McGee, all laced with alcohol, and ending in a very, very late night (read: early morning) trip to Denny's.

- Precious few hours of sleep would follow. Dave declined to attend summer league when the cab driver accidentally dropped him off at a casino. He's been waist deep at a blackjack table ever since. He just texted us a picture from outside of Ross (dress for less). We should probably go help him. Jordan and I just interviewed Ed Stefanski and I managed not to jump down his throat for, well, everything. Good dude though.

Just for the sake of whoever is still reading this, here's a before and after shot of the night. I'm not as grumpy as I blog. Tanner evidently just nailed a three. 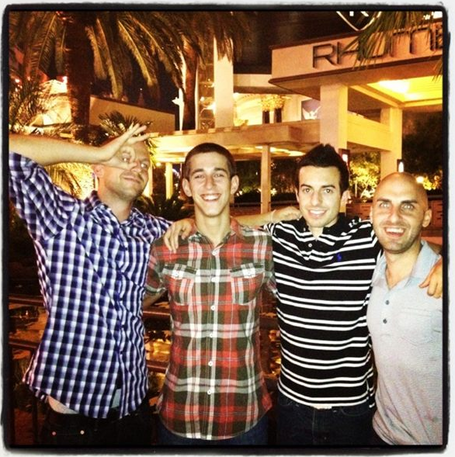 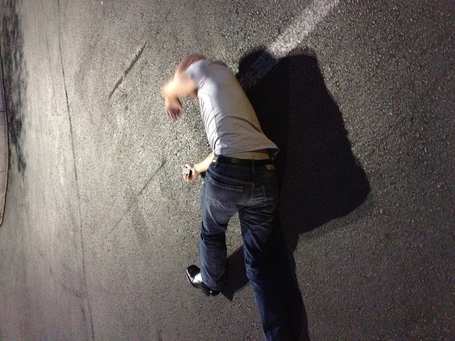 Notice how it's morning? Vegas. So Vegas.

We've got plenty more for the six of you still reading in the days to come. Love you all. Bloggers, out.