I started Liberty Ballers almost four years ago. During that time, Mike, Tanner and Derek stumbled upon the site, and eventually joined me in writing about the most mediocre group of basketball players ever assembled. In hindsight, we never had any idea what we were talking about (Tanner's first post attempted to convince everyone that Willie Warren was the next Allen Iverson), and probably still don't.

Over the years, the four of us developed legitimate relationships, despite mostly never meeting in person – Mike could've been a 400 pound alien woman, for all I knew (never trust Facebook). Then this past year, our good pal, Dave Rueter joined the fray, and a fifth member was instantly added to my imaginary friend club.

But then something great happened. Our illustrious blogging careers, combined with the 2012 Las Vegas Summer League allowed us to plan our first big group hug. Tanner and Mike hang out before, and we had all met Derek, but I had never met anyone else in person, and seriously questioned Dave's actual existence.

In the last 24 hours, the four of us finally met, saw each other somewhat-naked, listened to Shawn Michaels theme song in my car and almost played Blackjack with Bobby Jackson. As you can imagine, the first 24 hours of our Liberty Ballers adventure had some interesting moments and encounters. Make the jump for my first-hand report on how it happened.

I was standing on my driveway, unloading my work stuff from the back of a stolen truck, when I noticed a duck poop-looking green Nissan Altima suspiciously slowing down near my house. Was this my grandma? Was this an undercover cop? Was this Mike and Tanner? All of the above? Then I saw a guy similar to the one in all of my imaginary friend's Facebook pictures smiling at me.

Mike and Tanner emerged from the car, and I breathed a sigh of relief, because neither one of them were women and/or serial killers. Naturally, it was raining, so it took ever fiber in my being to restrain from re-enacting the famous Notebook seen, right then and there.

The first couple hours together, we did normal things, like feel each other's biceps, talk about Kwame Brown and how much we miss Derek. The only meaningful thing I learned was that Tanner can't make decisions – just can't.

After grabbing some Beef and Cheddars, we drove to the Las Vegas Summer League, picked up our media credentials, and tried to sneak in to the "Hospitality Suite" to steal some more food. After being denied free food, we rode the elevator to the Cox Pavilion with Matt Winer, before security had to pry Winer off Mike's leg. Matt was clearly starstruck – it was embarrassingly, really.

We hung out at the Summer League for a while, made a game out of spotting obscure, washed up NBA players (Anthony Mason!), and debated whether or not we should hand Ed Stefanski a dollar, and ask him to make "Basketball Sense". Most of the time we just looked and felt really dumb, because the three of us were wearing v-necks, and none of us brought computers, or our mothers – just a disgrace to bloggers everywhere.

After meeting a bunch of bloggers we work with, and Tweet, we departed UNLV for Von's, per Mike's request for "meats". We bought some meats, Tanner bought a $2 pizza, and we ventured back to my mom's house (there it is!) to feed each other, when we got a surprise text from Dave, who's flight had landed 45 minutes early.

"Landed," he said, which was much less descriptive from his previous text of "Just got on plane. Lot of Kwame Brown talk in row 14." Mike, Tanner and I stuffed as much food in our crevasses as possible, and hit the road to pick up the one guy we were all the most excited to meet (meat!). The 30-minute car ride consisted us of getting lost at terminal 3 and being worried Dave was either really old, or a serial killer (always a legitimate thing when meeting someone from the internet).

When we arrived at the airpot, Mike called Dave and asked him what he was wearing. "I'm the bald guy wearing a "Hacksaw Jim Duggan T-shirt". Of course he was. After a legitimate scare of us thinking Dave was this really old guy – like, really old – who smiled at us, we happily found a bald guy wearing a Jim Duggan t-shirt. We held up an entire airport's worth of traffic while we, less-awkwardly than expected, met Dave.

After picking up Dave, a whirlwind of events went down – most of which no one remembers after the Irish Car Bombs. But here's what I remember, in bullet-point fashion:

We kept it low-key our first 24 hours together, but tonight, chaos will ensue. Dave's getting married in a month, so we've failed as friends if he doesn't end up on top of Caser's Palace, with a Mike Tyson-tatto on his face, wearing nothing but a Sharone Wright jersey.
Expect pictures, nudity, and chronicles of our quest to interview multiple NBA groupies. If we happen to kidnap Justin Holiday for an interview or destroy the ESPN Truehoop bloggers in a 5-on-5 pick-up basketball game – we will – you'll hear all about it.
Cheers from Vegas! Here's a picture of Mike eating a banana: 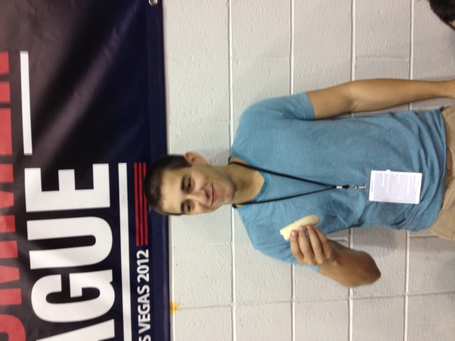