Share All sharing options for: Let's Learn About Arnett Moultrie!

We've already done some looking at Moe Harkless late last night, so let's look at a few vids and things for new Sixers draftee Arnett Moultrie, big man out Mississippi State and UTEP. I was going to hate him at the 15th pick, but when it came to the back end of the first round, that's pretty good value. And while I don't agree with their scouting reports saying he's a top 10 talent, they went up and got their man so I'm definitely not disappointed.

Again, we went to his college blog for some words about him. This is from Croom Diaries of the terrifically named For Whom The Cowbell Tolls, MSU blog:

Arnett Moultrie is a great rebounder first and foremost. He has immense talent and sometimes shows flashes of Kevin Garnett in my opinion. He can make the 15-17 foot jump shot, but may only be good for one 3 a year.

Mississippi State's team this year was full of talent but fell about because of poor team chemistry and bad attitudes. Moultrie wasn't the source of that, but he did let it affect his play at times. I think he has a little growing up to do before he can become the consummate profession NBA teams want....and after 4 years of college his maturity probably cost him from being a lottery pick. He could be a great player with the right work ethic because he has all the talent he needs.

The "great rebounder" tag is based on some old numbers that don't jive with the percentages we look at (21.7 DRB%) though on the offensive glass he is very solid -- better than anyone on the Sixers this year at 12.2%. Kevin Garnett is again going overboard because the defense is and never will be at that level. But I do like the optimism regardless.

Some more draft vids below, but watch out for Speezy comps. Shield your eyes! 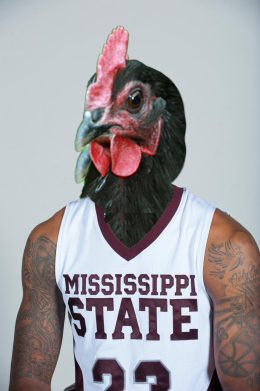 Here are some DX videos and an SB Nation video on Moultrie below. I really quite like the fuzzy chin hair.