Charles Barkley Shows Us How to Become Sixers GM

Share All sharing options for: Charles Barkley Shows Us How to Become Sixers GM

I don't know about you, but I've wanted to be the General Manager of the Sixers (or the Phils) for my entire life. I don't want to actually put any of the work in, I would just like them to one day decide to promote me from unaffiliated blogger to GM. The only problem with that (and I assure you, it's the only problem) is I didn't know how to let the Sixers know I was seriously interested.

Well, thanks to Charles Barkley, now we know!

94WIP’s Anthony Gargano is reporting that Charles Barkley would be interesting in becoming the new Sixers general manager. Gargano asked Barkley via text message if he’d be interested in being the Sixers GM, and Barkley responded "yes sir."

All you have to do is text Anthony Gargano that you're game and it'll become a huge story. Just look at this! 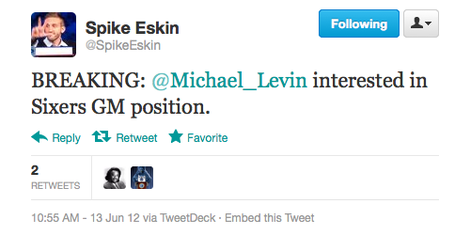 See! Spike is important enough to make this news! So just get out your cellies and text YES SIR to your favorite or least favorite or most irrelevant WIP personality and you'll get yourself a story.