Only this morning Derek listed Danny Ferry as one of the possible replacements for outgoing President Rod Thorn and now we have word that he's Doug Collins' favorite too. We've got three Tweets from the all-knowing Adrian Wojnarowski to prove it. 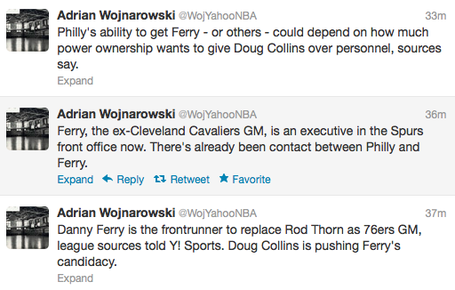 This is, as we've said, Doug Collins' team. He's not likely to settle for anything less than what he wants because, unless negotiations fall through, he'll get his man. So we may as well start embracing the idea of Danny Ferry as Sixers GM. And that might not be a bad thing, because as Jordan tells us, there are three things to know about Danny Ferry: 1) He's not Rod Thorn. 2) He's not Ed Stefanski. 3) He's not Rod Thorn. I have our best researchers scouring through papers to see if he's Billy King, but the early return is that no, he's not Billy King either.

The former power forward on the Cavs and Spurs has since taken on management positions with those two teams. He's famous for not giving LeBron James enough support in Cleveland and slightly less famous for being traded for Ron Harper. Between he and Doug Collins, the Sixers will have a #1 and #2 overall pick in their front office. Extremely important stuff, you know.

We'll see what happens, but I'm pretty ambivalent about this. He's not Rod Thorn, which is good since Rod has accomplished exactly nothing in his time here, but he's not Jason Levien either -- a guy I wanted for more reasons than the similarities in our last names. Ferry won't set the world on fire, but there's plenty of puns and photoshop jobs that are just asking to be made so at the very least, we'll have some new blood to savage with our vamp teeth.

Are you guys pumped or what?!