Sixers Slogans: Run With Us vs. Passionate. Intense. Proud.

Share All sharing options for: Sixers Slogans: Run With Us vs. Passionate. Intense. Proud.

Over at the dot com, Jon Bois is assembling a nice portfolio of slogan-related graphings, and today he conquered basketball and all of the team-centered horrifics from ad-agencies and overly excited executives. The Sixers are included thrice on the list of the worst NBA slogans of all time. 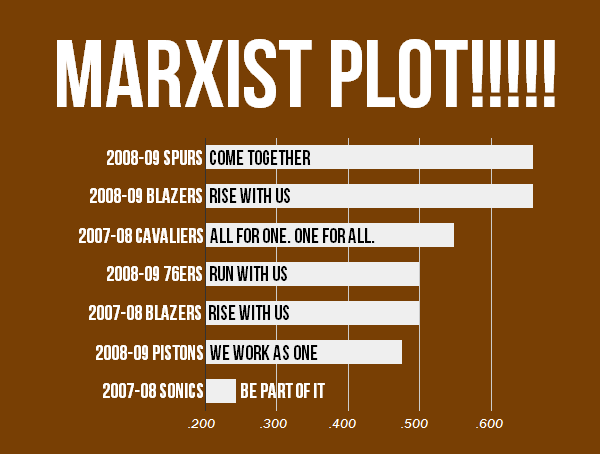 Just like their baseball counterparts, NBA teams are fond of this "we're all a team" thing. I meaaaaan ... I get how you could interpret the producer/consumer dynamic as a form of teamwork, but teammates don't hijack each other's tax money or charge each other 11 dollars for a beer. If this is the way you're gonna roll, I'm not really comfortable with you calling me your teammate. I'm just gonna buy your tickets with the same emotional gravitas I feel when I buy Pop-Tarts at the grocery store. Cool? Cool. Good talk, glad we had this talk.

The "Run with us" was nice because those Sixers couldn't score in the half-court either. Isn't that nice! Passionate. Intense. Proud. (PIP) lends itself to more mockery because of how bad the Sixers had been the last half of the season. But now that they're winning games at an alarming rate, maybe PIP is working.

"It's A Philly Thing" may as well be saying "You do remember the Sixers are from Philadelphia, right? The same city the Eagles play for? The Eagles are cool."

Anything is better than show ya luv. What do you think?