Boozerface: One Final Word on the Sixers and Bulls Series

Share All sharing options for: Boozerface: One Final Word on the Sixers and Bulls Series

In the midst of all the celebrating and pantslessness, we strayed away from criticizing the Sixers too much for just how poorly they played against the Bulls in the deciding Game 6. It was all about Andre Iguodala's free throws and strip clubs. And before we went full-blast on the upcoming second round against the Boston Celtics, I just wanted to have a quick final thing about Chicago.

The Sixers won because the Bulls didn't have Joakim Noah and Derrick Rose. It wasn't because they "played tough" -- the Bulls missed their two best players, and the Sixers played not-horrible enough to lose the series. Scoring points in transition was really the only way they could get something going offensively, and even that was suspect a lot of the time when they couldn't finish at the rim later on in the series.

They did manage to get to the line a whole lot more than they did in the regular season, which is encouraging. The absence of Thaddeus Young (with the exception of that, in retrospect, GORGEOUS finger roll late in Game 6) was not. Spencer Hawes put up a whole bunch of empty stats that didn't pass the eye test -- I don't think I've ever seen him pull down a contested rebound -- and Collins, for whatever reason, kept playing him in the 4th quarter. 30 minutes for Hawes while Lavoy Allen rode the pine. Jodie Meeks was equally invisible. And Iguodala doesn't look like himself.

Now that that's out of our system, we can give the previous two paragraphs the collective middle finger and look onwards to the Celtics. With the exception of just one Boozerface after the jump. A Boozerface that will live in infamy. 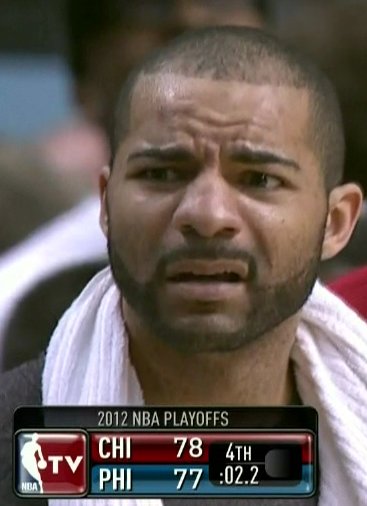