I just want to start this post off with two images. 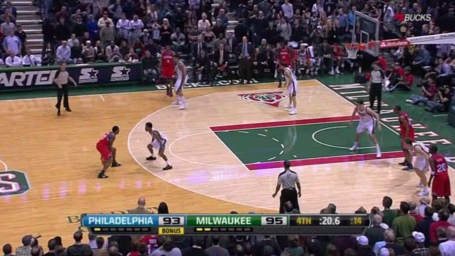 Here are the Sixers players positioning when he finally attempted the shot: 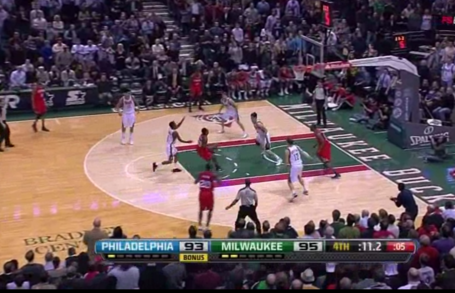 Jodie and Iguodala pinched up a little bit, but only because Lou got himself trapped by Brandon Jennings defense and very nearly lost the ball. Thaddeus Young also came up as an outlet valve but returned to his original location.

*sigh*
I'm not really sure what to say. Two weeks ago when the Sixers lost to the Grizzlies, I slept and wrote the recap in the morning, and it allowed me a slightly different perspective than had I written it immediately following the game. No such luck on this one. This was a game they should have won against a team they should have beaten that was playing poorly. There was so much negative in this game it's hard to take out anything positive.
Overall, the team looked tired. They're 3-8 in their last 11 games, but things are not as bad as they appear, just like they weren't as good as they appeared earlier in the year. The Sixers have actually outscored their opponents (89.8 to 89.5) over the last 11 games. Eventually, a ball will bounce their way.
In short, they are who we thought they were, even if we allowed ourselves to hope for better when the year started.
Player of the game: Louis Williams
Next up: Wednesday, at home against Boston
76ers vs Bucks boxscore