The Sixers Sky May Feel Like is Falling, But It's Not

So, the Sixers have lost 8 of their last 10 games. Four of those losses have been by 5 points or less. Each of those losses was painful in their own beautifully tragic way. There's a good section of Sixers fans ready to throw in the towel. If you value our opinion at all, which some of you don't (in which case, why are you here?), then you'll heed our advice and keep the towel firmly in your hand, Rock.

We know how painful it is to watch them continue to give away close games. We live and die by each Louis Williams iso as you do. And we're fully aware that the last time the Sixers beat anyone worthwhile was a month ago against the Lakers. There's a lot of things that you can fault the Sixers for, from personnel to the coaching to the blogging. But if you don't leave room for randomness and luck, then you'll be cashing in your chips too early.

Just as in baseball, sometimes balls get through the infield and the pitcher is blamed, sometimes shots miss by a millimeter or a tipped ball goes the other way and the team is condemned for it. The Sixers have been tremendously bad in the past ten games. Not including last night, here's the shooting percentages from B-R for the last ten:

Now here's the percentages for all of the games before then: 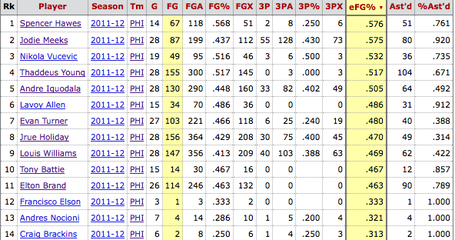 The only person on the team to be shooting better in the last ten games is Lavoy Allen, who only marginally improved. Everyone else is way down. Is this indicative of playing a harder schedule? Of other teams figuring them out? Of just going cold at the same time? In all likelihood, it's all three.

For reference, here's how they've shot over the past ten games (same circumstances as the first table) in the 4th quarter:

Lou Williams, Evan Turner, Jodie Meeks, Andre Iguodala, and Elton Brand have all been horrendous in the fourth. Embarrassing. Thaddeus Young is only where he is because of his great 4th quarter against the Bulls. This. Will. Normalize.

No, the Sixers are not the 16-6 team that beat the Bulls at the beginning of February. They're just not that good. They will not be competing for a championship this year. If you thought that then, you got a little too excited. If you think they're not good enough to win the Atlantic, take a first round, and maybe even a second depending on the matchup (and LUCK), then you're taking too much stock in a few shots over the past ten games.

Things normalize. Shots miss. Shots fall. At the end of the day, the Sixers are never as great as they seem to be and never as terrible as it feels they currently are. We know you're frustrated. So are we. The shot selection, the offense, the coaching, they're all frequently abhorrent.

You can blame whoever you want, but when the shots start falling, just remember that they were bound to.