The Sixers third loss in a row came at the hands of the best player on the court. Kevin Love had played a terrible game offensively (7-23 from the field) but with just over 3 seconds left, was the benefit of a call from the refs that was as generous as it was rare. He sunk two foul shots to put the Timberwolves ahead and give them the 92-91 lead.

After the jump, we're only talking about the last two plays. Take a deep breath and let's get into it.

After a Thaddeus Young jumper put them up one and a Love missed three kept them there, there was a three second differential between the clocks. Rick Adelman, strangely, opted not to foul, so the Sixers could theoretically run down the clock to three seconds left, take a shot, and by the time it theoretically missed and clanged off the rim, there would have been around one second left for whoever brought in the rebound. Seemed like it was all but settled.

But with this team, nothing is ever easy in the waning moments.

The ball was, predictably, handed to Louis Williams to do whatever it is Boss does as the clock winds down. While the seconds ticked away, Lou dribbled and dribbled until finally making a move with about 10 seconds left (7 on the shot clock). Anyone who's ever seen the last two minutes of a Sixers game knew he was going to pull up for a Boss shot, which he did. That bit was unsurprising. It's unfortunate that he felt the need to take an 18-foot fadeaway with the game on the line, but we've all come to expect that with Doug Collins, Louis Williams and their combined decision-making. And since Lou wasn't exactly "on" tonight, it's not a shocker that the shot clanked off the rim either.

What is tremendously inexcusable is the fact that Lou released that shot with over three seconds on the shot clock. Regardless of whether or not you think just chucking the ball into the rafters would have been the smart move (first thought is of Hakim Warrick doing it at Syracuse in the tournament), you have to take as much time off the clock as possible. The difference between three seconds left and one second left is absolutely enormous, and Lou did a terrible job putting his team in a good position to win.

Either way, the Wolves have the ball with just over 3 seconds left. The inbounds play goes easily to Love, who turns past Thaddeus Young and goes baseline. Immediately, that's on Thad for not staying in front of him going to the basket. Next, Andre Iguodala cheats off his man and reaches in to strip the big man. Reaching in is always risky because even if you get a lot of ball, it just looks like a foul, so officials are more prone to calling it. Andre gets a good chunk of ball, throwing off Love's momentum, as he stumbles to the basket and takes a shot that Elton Brand easily blocks. The whistle blows, chaos ensues, Doug Collins is irate. Let's look at three pics to see if this was a foul or not. 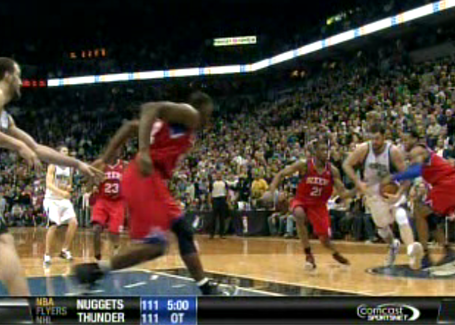 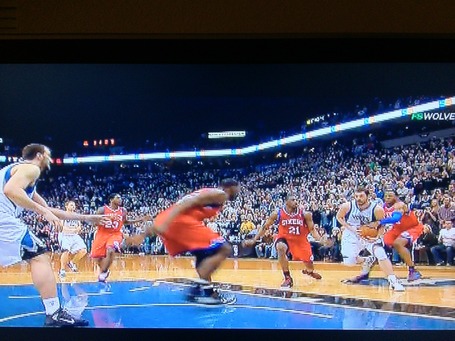 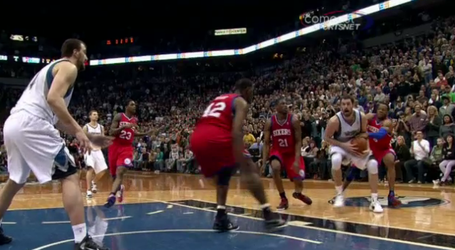 The second shot is from Jordan's Twitter, the other two are from me, the latter where Dre's hand is further on top of the ball, trying to rip it out. In all three shots, Dre's hand only has ball, not any wrist, elbow, bicep, fingers, or crotch. For all intents, the only possible body part on Andre's person that could be touching Mr. Love is his forearm. That could be rubbing up against Love's inner elbow and frictioning some contact. Other than that, he's all clear. Here's the video, courtesy of The 700 Level. After watching it a million times, I still don't think that's a foul.

I'm fairly unbiased when it comes to all things Sixers, as regular readers of this blog will attest, but aside from the fact that I don't think he fouled him, there are two additional factors in play here about the whistle.

The Sixers did a ton of things wrong all night, none more egregious than in the final two plays. But if the officials called the game as they had been calling it, the Sixers would have still gone home with a W. Sadly, the Curse of the Superstar strikes again. Kevin Love is the best player out there, the game's played in Minnesota, and he's the benefit of those gift-wrapped calls. The Sixers, lacking anything resembling such player, have gone the whole season without those helping zebras. Those whistles won't even out come playoff time either.

We'll talk tomorrow about the other 47 minutes and 54 seconds. Tonight is all about Lou's shot, and the foul call. Rip it apart below, but either way, the Sixers are losers of three straight and just four up on Jeremy Lin and the Knicks.