On this edition of the Sunday Morning Shootaround, we have Pacquiao Photoshops, a return to Benihana, and a true definition of the word swag. Enjoy... 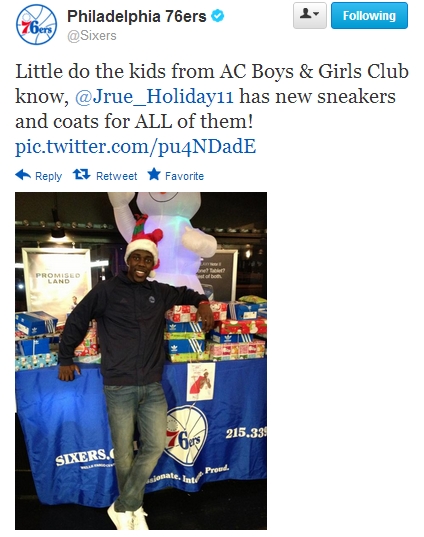 Although the SMS is usually heavy on the snark, we just wanted to take a moment to give kudos to Jrue Holiday. Last Wednesday, Santa Jrue hosted a holiday party for 50 children who were affected by Hurricane Sandy. Not only did the kids attend a private showing of "A Charlie Brown Christmas", but each of them received presents courtesy of Hoilday, Rival Sports Group and adidas. And they even got to see Holiday dance a little bit... 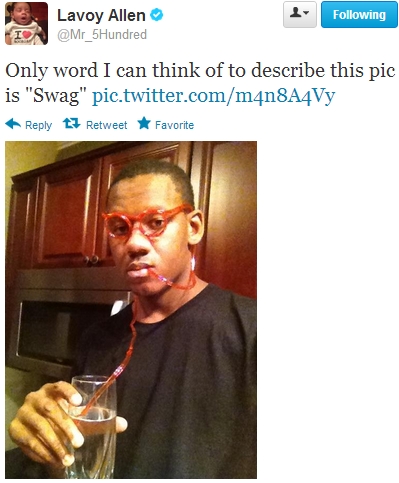 Contrary to Lavoy Allen's opinion, this picture is not "swag." It's the opposite of swag. Whatever the appropriate word for "a desperate attempt at someone to do attain swagginess, but failing miserably" is, that's what this picture is.

THIS is swag. Lavoy is just trying too hard. 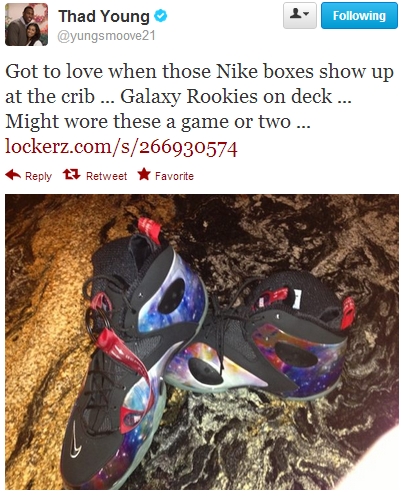 When you play in the NBA, boxes of sneakers randomly show up at your doorstep (yes, even for guys like Arnett Moultrie). In this example, Thaddeus Young received a pair of $215 not-yet-released-to-the-public Galaxy Rookies that he "might" wear for a game or two. Must be nice... 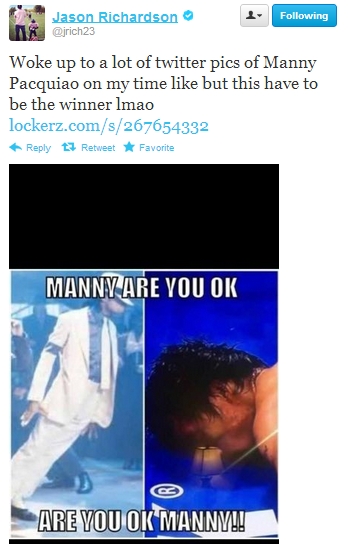 In the fourth installment of their epic quadrilogy, Juan Manuel Marquez knocked the entire hell out of Manny Pacquiao last night. Pacquiao was out cold for a good two minutes, but since he was able to get up and conduct a post-fight interview (despite suffering a concussion), it's officially OK for us - and J-Rich - to laugh at the plethora of Pacquiao-related Photoshops that have flooded social media in the aftermath of the knockout.

Whenever something funny happens on television (or every time Chris Bosh appears on screen), people rush off to their favorite photo editing program to put their own comedic spin on things. Pacquiao's most recent defeat might be the last stand for the only man in boxing history to win world titles in eight different weight classes. But regardless of his resume, I will spend many hours laughing at this, and especially this.

On his birthday, Dorell Wright celebrated at the finest chain restaurant in all of the land... that's right: Benihana!

We talked about how much NBA players love hibachi before on the SMS, but while doing some research for this post (yes, we do research for these posts), I came across this gem featuring one Swaggy P busting a freestyle while waiting for his teppanyaki.

At this point, it's only a matter of time before the Sixers go the Miami Heat route and host a celebrity cook-off at Benihana. Who wouldn't pay $250 to have Maalik Wayns (poorly) grill up some steak for you? Don't sit at Dorell Wright's table, though - he'll probably miss two out of every three times that he tries to flip a piece of lobster in your mouth.