Who Would Buy That? Sixers Christmas Edition

Because all sports have stupid merchandise, not just baseball.

Share All sharing options for: Who Would Buy That? Sixers Christmas Edition

Greetings, Sixers fans! I’m Liz, and I write for SB Nation's Phillies blog The Good Phight. [ed. note: Liz is the best. Treat her well or I will smite you. Happy Christmas!] You may be wondering what I’m doing here. Good question, you’re all very inquisitive and intelligent. While I normally write about the game of baseball, I take time every now and then to point out the ugliest, stupidest, strangest, and most useless pieces of baseball merchandise and ask "Who would buy that?" Your fearless leader Michael Levin has asked me to apply my talents to some of the Sixers merchandise. So enjoy this Christmas gift from me to you, Sixers fans. 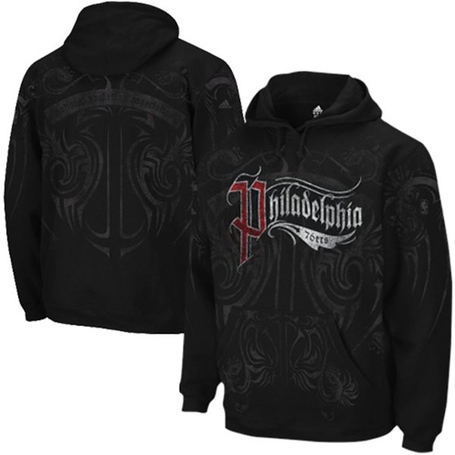 Haven’t we gotten past this? As a society, haven’t we moved on? I really thought that Jon guy from Jon and Kate Plus Eight was enough to kill this horrible looking clothing style. But no. Here it is, showing up unwelcome when you least expect it, like jury duty or gonorrhea or Kwame Brown.

This hoodie sweatshirt is all black with one of those pockets in the front. Printed all over the black is a gray design that I couldn’t identify at first, but after closer examination I realized is an anchor with swirly things all around it. Explain that one to me. I’m begging you. Are the Sixers nautical? Did they start as a nautical team? Is the Liberty Bell actually an anchor in disguise? Does "Philadelphia" mean "secret unrecognizable gray anchor" in an unknown dead language?

Thankfully, "Philadelphia" is printed over the chest of the sweatshirt in angry looking tattoo words with lots of angles. The P is really big and red, and it’s underlined in white. Inside the underline in small letters it says "76ers". Yes, the ugly Sixers hoodie for people who don’t want anyone to know at first glance that they’re a Sixers fan. Who would buy that? Your poor, sad, henpecked friend.

Well, not him, exactly. His overbearing, overprotective, bat shit insane mother. She saw an ad for it in her son’s email inbox when she was checking to make sure he’d gotten her "100 Ways Sneakers Can Kill You" and "Palin for President!" emails. "IT LOOKS JUST LIKE WHAT I SEE CELEBRITIES WEARING TODAY. WHAT, DON’T YOU LIKE IT? PUT IT ON AND GET THAT LOOK OFF YOUR FACE. IT’S A PRESENT SO YOU’LL WEAR IT AND I DON’T WANT TO HEAR ANY WHINING OUT OF YOU. AND TURN THE TV UP, NOT ALL OF US ARE YOUNG WITH PERFECT HEARING. SOME OF US ARE MOTHERS WHO HAVE SPENT OUR LIVES CARING FOR CHILDREN AND OUR HEARING ISN’T PERFECT ANYMORE. I WANT TO HEAR PAT SAJAK CALL OUT THE LETTERS." He wore it just that one night before relegating it to the bottom of his closet. Or, he tried to. "WHERE’S THE TRENDY SWEATSHIRT I BOUGHT FOR YOU? WHY DON’T YOU EVER WEAR IT? DON’T YOU LOVE ME? DON’T YOU CARE ABOUT ME? I’M YOUR MOTHER. PUT THE SWEATSHIRT ON. AND WILL YOU TURN THE HEAT UP? I DON’T CARE IF THE THERMOSTAT SAYS IT’S 80 DEGREES IN HERE, IT DOESN’T *FEEL* LIKE 80 DEGREES. YOU SHOULD GET THAT CHECKED. I’M COLD." He worries constantly that someone he knows is going to see him wearing that hideous sweatshirt and then he’ll never hear the end of it. He tried telling his mother that if a woman saw him wearing that sweatshirt, he’d never get another date again. (He was not exaggerating.) "THAT’S NONSENSE. WOMEN WILL THINK YOU HAVE A THOUGHTFUL MOTHER WHO WANTS YOU TO LOOK LIKE YOU’RE A BIG MONEY CELEBRITY. AND WHAT WOMAN WOULDN’T WANT TO MARRY A MAN WITH A MOTHER LIKE THAT?" Who, indeed. 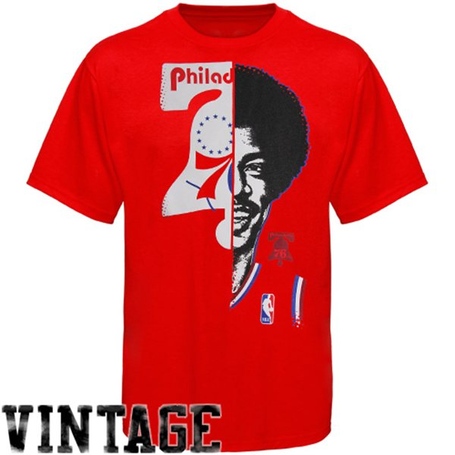 This shirt seems like a joke. It seems like a silly, silly joke. Do people not know that a shirt has two sides? That both are easily accessible? Was it too easy to put Julius Erving's face on the front and the Liberty Bell on the back? Smashing together half of Dr. J’s face and half of a 76ers Liberty Bell just seems like a stupid design concept. It looks demented. It looks either like Dr. J had a tragic lab accident involving a Liberty Bell souvenir, or the bell had an affair with a Dr. J facemask and that’s the spawn of their unholy union.

I’m not even sure what this shirt says to those looking at the wearer. I think it says "I have unquestionably bad taste in shirts." The design is just ugly. I mean, I love me some Dr. J. And I love vintage Philadelphia sports logos. And normally when you combine two awesome things together, you get something even awesomer. Chocolate plus ice cream? Brilliant! Cheese and macaroni? Genius! Dr. J and vintage 76ers Liberty Bell logo? WOMP WOMP TRY AGAIN PLEASE.

And I love the description from the website. "Every now and then something truly amazing happens. The stars align during a full moon and a bit of magic transforms one of the best players in the NBA into an unstoppable force." I’m trying to see how any of that has anything to do with this confusing eyesore of a shirt. Is Dr. J actually a Liberty Bell brought to life with magic words? If we figure out what they are and say them in front of him, will he turn back into a little Liberty Bell? Ooh, sitcom idea! They can air it after The Jersey on Disney Channel.

Who would buy that? Comic Book Guy. Well, comic books aren’t the only thing he likes. He likes the Sixers. He blogs. When he saw this shirt in the $1 bargain bin, he became inspired. It was a sign when the store clerk refused to take his money when he tried to pay for it. "Please, just get that out of here. It’s the stupidest thing I’ve ever seen." He spent months in his room teaching himself how to draw so he could bring to life his new, completely original character: Liberty Bell Man! Ok, the name needs some work, but the concept is essentially there. Dr. J is a super rad basketball player by day, but at night, when he executes a secret, signature dunk move, he turns into LIBERTY BELL MAN! Dr. J’s head turns into a vintage 76ers Liberty Bell and he goes out to fight crime with his basketball.

Ok, so the concept needs some work, too. But he’s gotten a lot of encouraging notes from his friends and the guys at the comic book shop. "Stupidest thing I’ve ever read." "What does the Liberty Bell head do? How does he see or talk?" "Wouldn’t Dr. J just fall down with a Liberty Bell on his head?" "Your drawings look like something my five-year-old would do if we put the paper in the microwave and melted the crayon." "I want my 10 minutes back." "Dude, give it up. This is moronic." He’s waiting eagerly for his first cease & desist letter from the NBA, unaware that his idea is too stupid to warrant one. 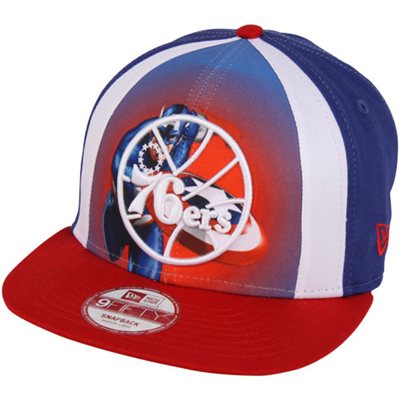 This hat defies explanation. Here are the first few sentences of the product description. "How can you make a Sixers hat even more awesome than it already is? By adding Captain America to it - obviously! Sometimes it just clicks and you know that two things are destined to be combined. This must be how the person who invented the peanut butter and jelly sandwich felt." None of that is true. None of it.

Let’s start with the concept. If Captain America has anything to do with Philadelphia, basketball, or the 76ers, it’s news to me. Unless Captain America is a direct descendant of one of the Founding Fathers, this makes no sense. And even if he was, it still makes no sense. Even more egregious, they're wasting a valuable opportunity to put a shirtless, mulleted Captain America Spencer Hawes on a hat. No one would wear it, but at least we'd link to it copiously. As I talked about above, you can’t just slap two cool things together and assume it makes them cooler. The world doesn’t work that way. Massages are cool. And so are toasters. Voila, the Massage Toaster! For when you’re making toast with a sore neck and you don’t mind first degree burns!

And when I find the person who came up with the design of this hat, I’m going to sit them down with the person who designed that Dr. J shirt and make them slapfight to determine who has to use the Massage Toaster on their face (patent pending).

The design of this hat is baffling. Putting Captain America on a hat is not a bad idea. Cap is an awesome superhero with a distinct, recognizable look. Until, of course, you slap the 76ers logo on top of him and it looks like a red, white, and blue blob underneath the Sixers logo. It’s just stupid. None of it makes sense, none of it is attractive, no one should ever, ever, ever buy or wear this. Who would buy that? An asshole who wants to fool a blind person. "Oh yeah, this hat is SO COOL everyone will think you’re so rad for wearing it. What does it look like? Um, just think of the coolest hat ever. Now add more awesome to it. That’s what it looks like!" That person is going straight to hell for both fooling a blind person into wearing this hat and for buying the hat itself. It’s an abomination.

Just stay away from it, I beg you.