The Sixers may be 1-1 on the season, but when it comes to social media, the team is still undefeated...

Welcome to the latest edition of the Sunday Morning Shootaround. This week, we learn which Sixer had a hairstyle even worse than Andrew Bynum's afro, get a behind-the-scenes look at the first days of Maalik Wayns' career, and recap the debut of biggest gun that anyone has seen since Doom. 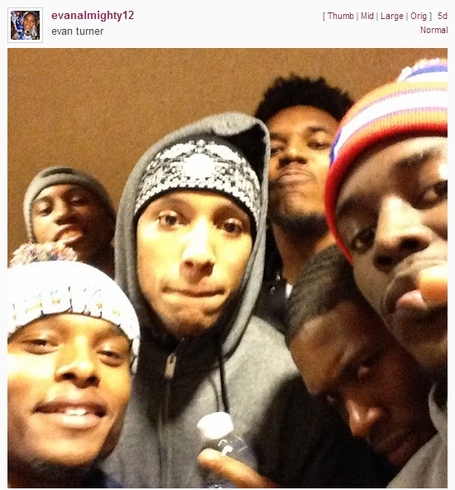 So Mike Levin threatened me at gunpoint asked me to use the photo above in the weekly social media recap. I planned on going with it anyway, but sometimes I like to let him think that the rest of us LB writers actually listen to his ideas.

Anyway... this shot was taken the day before the opener. Using super-secret technology, here are the actual thoughts going through each player's head the moment this photo was taken (clockwise, from left to right):

Maalik: This is pretty cool - I'm about to play in my first NBA game.
Thad: Hey, what are you guys doing? Oh... let me get in the picture!
Evan: If anyone can find my jump shot, please let me know. Please...
Nick: This is the face I gave the Nets' bench when I hit that big 3 against the Nets in the preseason. Swag.
Jrue: Yeah, I'm about to get paid...
Royal: Wait... you mean if I poison Jrue Holiday's pre-game meal, I might get a chance to play? 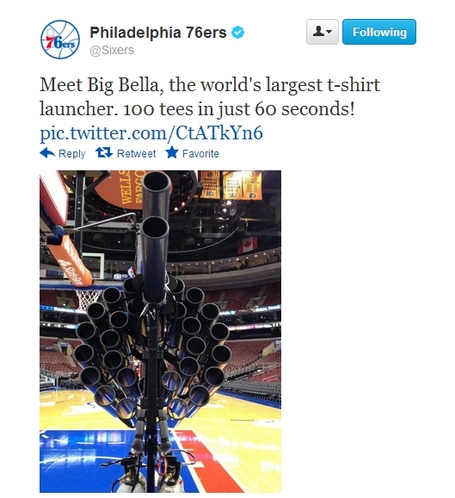 On Opening Night, the Sixers officially unveiled Big Bella - a T-shirt launcher that (as the tweet claims) can reportedly fire 100 tees in 60 seconds. I went to the home opener to watch this monstrosity in action, and I noticed a couple of things:

Apparently, Spencer Hawes chose to dress up on Halloween as a competent basketball player. 16 points (including TWO threes), 12 rebounds and 5 blocks in 31 minutes off of the bench. It's by far the most amazing non-James Harden stat line posted in the NBA this season. 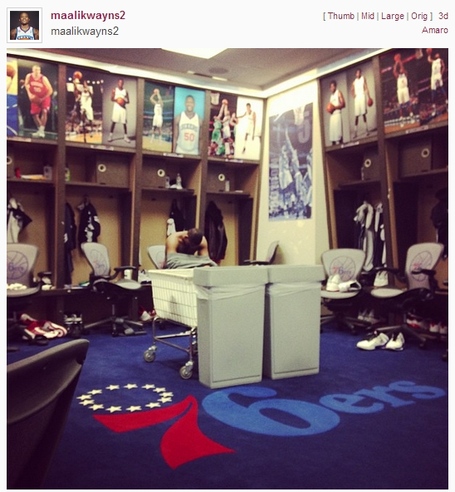 Not only is Maalik Wayns' living out his boyhood dream, he's taking special care to document every moment of it.

In this photo, Wayns takes us into the Sixers' locker room the morning after the season-opening win over the Denver Nuggets. And here we see Lavoy Allen deep in thought at his locker - presumably, he's trying to figure out how he got outplayed by someone named "Kosta Koufos" the night before.

Maybe Lavoy should have told the Sixers to fire Big Bella at Koufos to slow him down. Or maybe he should have borrowed Spence's Halloween costume. 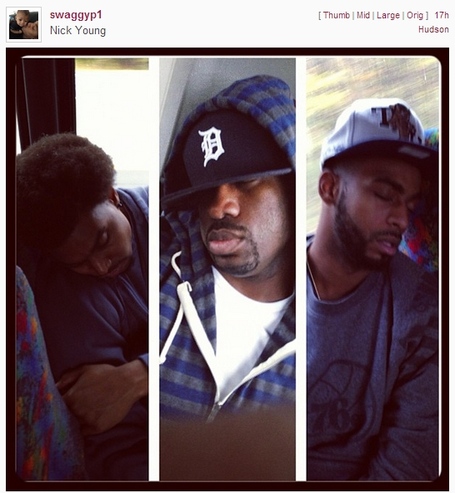 During the Sixers' trip to New York on Saturday, Nick Young caught a number of his teammates in compromising positions. I can understand why Jason Richardson and Dorell Wright might be tired, but why is it that Andrew Bynum can't stay awake for a two-hour bus ride? It's not like he's practicing - in fact, he isn't able to do much at this point other than stand around. In his defense, however, it must be pretty exhausting maintaining that new 'do of his. 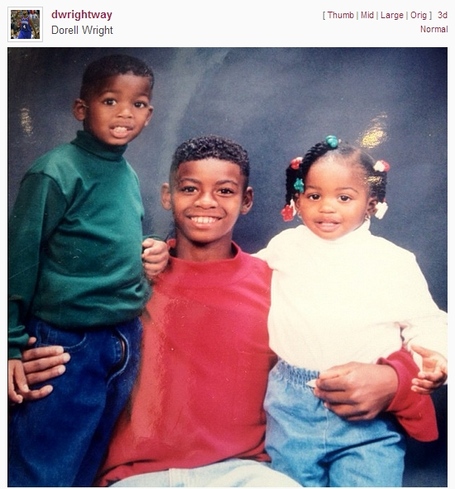 Dorell Wright gave us another Throwback Thursday gem on Instagram, this time posting a picture with him sporting an honest-to-goodness S-curl.

Similar to a woman's permanent, an s-curl is applied using relaxers containing lye, and, like a jheri curl, requires continued use of specialized shampoos and conditioners to keep the chemically altered hair from becoming dry, hard, and brittle.

S-curls were most popular among African-American men during the 1990s, when many popular musicians such as Timbaland and the members of Dru Hill wore the hairstyle.

This is typically the time where I'd provide some kind of witty remark, but that would just be piling on at this point. Dwyane Wade couldn't resist posting a response, however:

Later this week, I fully expect to see a Throwback Thursday picture of a young Spencer Hawes sporting something embarrassing like a mullet. Oh, wait...