While the Sixers failed to share any #ThanksgivingStrugglePlates with us on social media, we can all be thankful for what they did decide to post.

Evan Turner may not ever turn out to be the player that most of us thought that he would, but at least he understands the important things in life. Topanga was (and is) one of the most-criminally underrated girls in sitcom history. The fact that she doesn't make many top 10 lists is an outright travesty, and once that bears correcting:

(* Editor's Note: By "definitive", we mean "the first handful of names that came to mind while the author was in the midst of a sangria/margarita-fueled writing binge.") 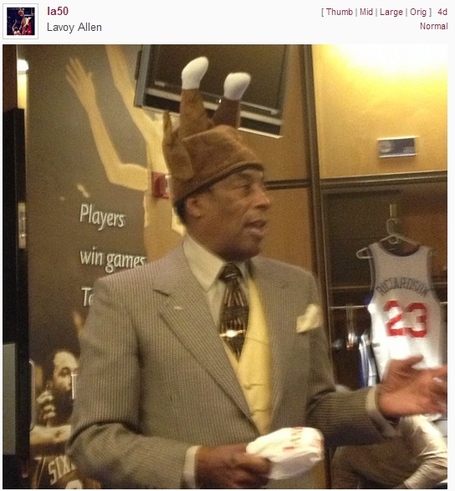 The man in the picture is Sonny Hill, executive advisor for the Philadelphia 76ers. Some of you may know him from his radio show on 94WIP (where he invites listeners and callers into his "Living Room") or as the head of the Sonny Hill Basketball League.

Hill is known as "Mr. Basketball" for a reason: You can count on one hand the people who know more about the game than Hill and still have a couple of fingers left over. His work in and around the sport led to his induction into the Naismith Memorial Basketball Hall of Fame in 2008 when he received the Manny Jackson Human Spirit Award.

Here are two important things to know about about Hill:

1) It is impossible to have a conversation with him that is shorter than five minutes. If you ask Hill something about basketball and he has the time, he'll tell you everything that you need to know and more. But don't ask the question if you have somewhere to be in an hour.

2) The man is always impeccably dressed, oftentimes wearing the finest garments from The Steve Harvey Collection.

So, with the latter fact in mind, seeing him wearing a turkey hat last Tuesday was... interesting to say the least. And we can say with confidence that this picture was taken after the Toronto game - if Hill spoke to the team before the game, there's no way they would have made it on the court in time for the opening tip. 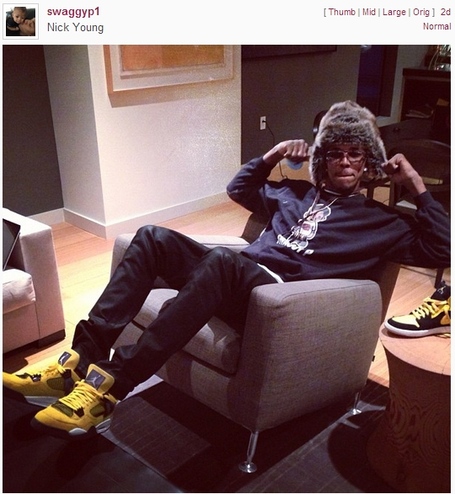 I'm not even sure where to begin with this one. Only Nick Young can pull off the yellow kicks (which happen to be the Jordan Thunder and Lightning 4s for the sneakerheads out there) with the skinny jeans and the Russian Ushanka hat (indoors, no less) without looking completely and utterly ridiculous. But fact that he's wearing a T-shirt with a caricature of himself as "Swaggy P" takes this photo over the top. And the thing is, I'm 100% positive that this isn't staged in any way - Nick Young actually conducts his daily business looking like this without a care in the world. And that, my friends, is the epitome of swag. 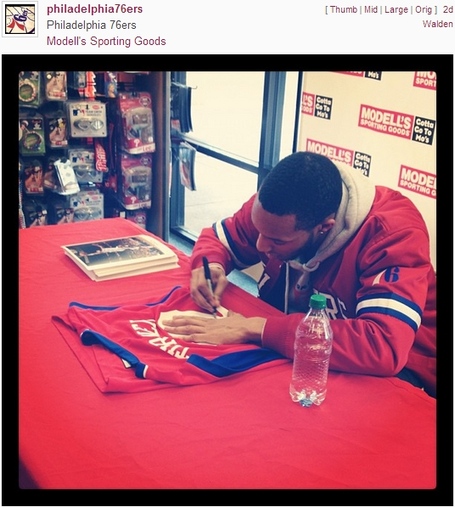 If Evan Turner was still under the impression that he had favored nation status on the Sixers, he surely doesn't believe that any longer. While the rest of his teammates were out shopping or otherwise enjoying their Black Friday afternoons, "The Villain" was signing autographs at the Modell's Sporting Goods store on Cottman Avenue.

So why did he get the assignment? There's no way of knowing, but I'm sure that the unwilling participant lucky representative was chosen after losing some kind of team-wide, three-point shooting contest. On second thought, Arnett Moultrie probably lost the contest, but since no one at Modell's would actually recognize him, Turner was chosen to go in his place. 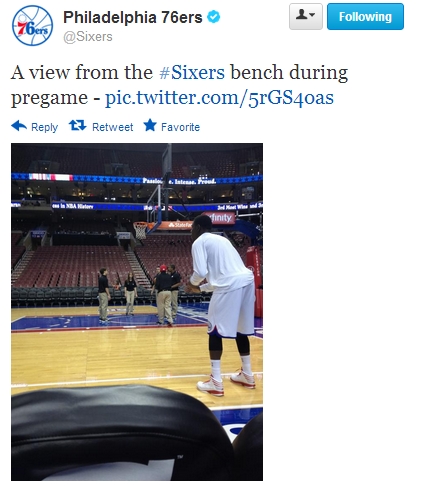 And speaking of Moultrie, if you ever wondered what it would feel like to live his life for a day, the picture above is for you.