The Philadelphia 76ers have been pretty quiet on social media recently, which means they must have gotten wind that we've begun tracking their every move. Our work here continues, undeterred. 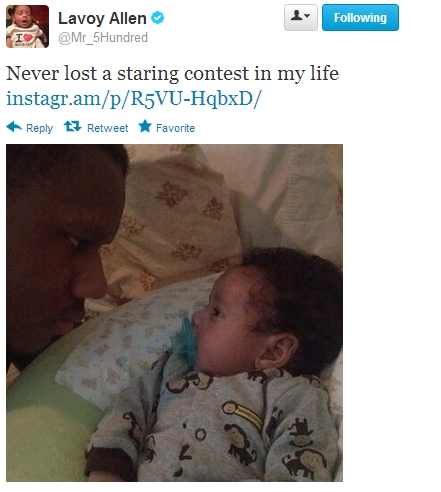 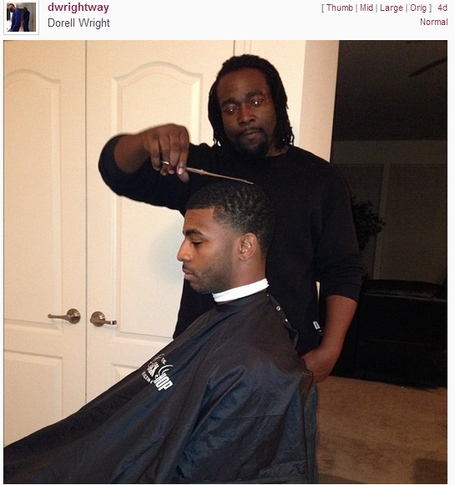 In an otherwise slow week on the Sixers' social media front (long homestands are not exactly conducive to embarrassing pictures and/or tweets), Dorell Wright posts this rather innocuous gem of his barber cutting his hair at (presumably) his house. Aside from the fact that the aforementioned barber bears a remarkable resemblance to rapper Wale, this picture is extraordinarily telling.

There is probably no better use of one's money than to have a barber (or stylist) come directly to your place of residence. Think about it: Going to the barber shop/beauty salon/SuperCuts is a chore, and could really throw off your whole Saturday if you don't time it right.

What makes this even better is that judging by Wright's barber's Instagram feed, he flies to Philly every week from Long Beach, California to work his magic (presumably on someone else's dime since he cuts DeSean Jackson's hair as well).

Maybe it's just me, but one of the first things that I'd do if I ever made NBA money (after buying my mom a mansion and making it rain for three days straight at King of Diamonds) would be to make sure that I never had to leave the house for a haircut again. You know who DOESN'T have a barber come to his house? Andrew Bynum. He probably has his very own bowling alley, however. 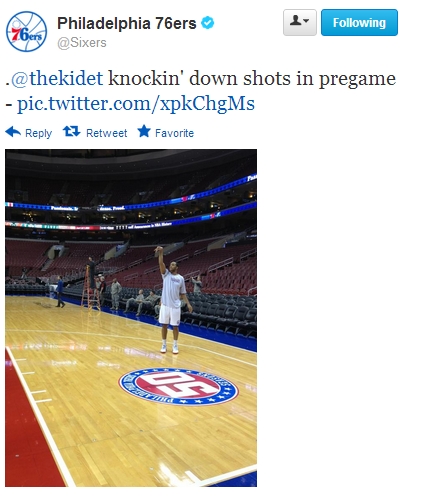 If this tweet is to be believed (and I have my doubts since the word "shots" was used, and that seems to imply that more than one shot was made by ET in a brief span), then maybe we've finally found an answer to Evan Turner's shooting woes. All the Sixers' coaching staff needs to do is draw up some plays that leave Turner completely wide open on the wing.

I'm sure this will be a lot easier when (if?) Bynum comes back.

Kwame Brown won the "Ace of Spades" award after the Sixers' win over the Utah Jazz on Friday night. For those who aren't in the loop, the "Ace of Spades" is an honor given out by Doug Collins after each win to the player who made the biggest difference in the game. Some people think that it's "lame", but I kind of dig it. Players at all levels seem to perform better with some sort of motivation (even multi-million dollar athletes), and if that motivation comes in the form of a playing card in a little wooden box, then so be it.

That said, the fact that Brown won the award after such a pedestrian performance (2 points on 1-for-6 shooting, 6 rebounds) is ridiculous. This is eerily similar to the time when David Arquette won the WCW World Heavyweight Championship back in 2000 as part of an ill-fated attempt to drum up support for the forgettable "Ready to Rumble."

Do you think that it's a coincidence that WCW went under less than a year after Arquette won the strap? I think not. 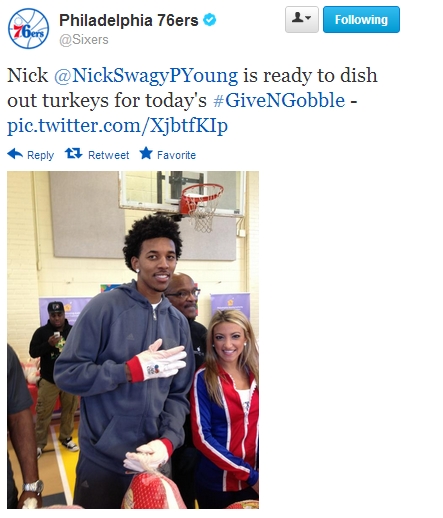 In an admirable display of generosity, nine Sixers banded together and purchased 1,000 turkeys to give away to needy families this Thanksgiving. Shooting guard Nick Young happened to be one of those players, and he personally handed out the turkeys at a Philadelphia Housing Authority event on Saturday.

Please note that this photo was taken at 2:57PM on Saturday, November 17, 2012 A.D. This is the last time you'll see Nick Young dish anything out for the rest of the season.