Which Liberty Ballers' writer has an eye for fashion? Why does Nick Young wear clothes better suited for a 14-year-old? And what in the world was on Spencer Hawes' head last Friday night? We're dressed to impress in this week's edition of the SMS... 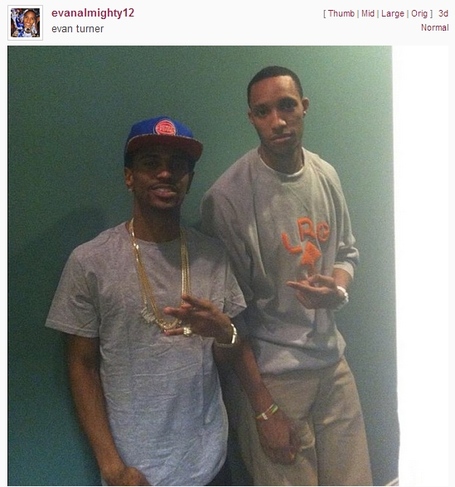 One of the men in this photo grew up in the Midwest, has a pretty good jumper, and once led his school's basketball team to the state finals. The other man is Evan Turner. Oh God. 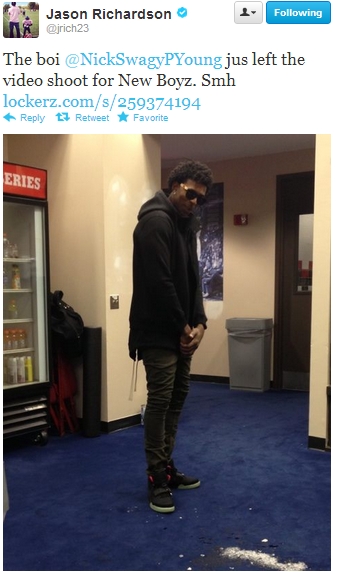 This is what Nick Young wore on the team flight to New Orleans: A black hoodie, skinny jeans, and a pair of Air Yeezy 2s. If he actually wore this on gameday, you could consider it a big middle finger to David Stern's dress code. Sadly, J-Rich's allusion to the New Boyz is on point: Swaggy P looks like he could be an extra in the "You're A Jerk" video.

And in case you were wondering, the white, powdery substance on the floor in the bottom right-hand corner of the photo is Swaggy's conscience. He no longer has any need for it. 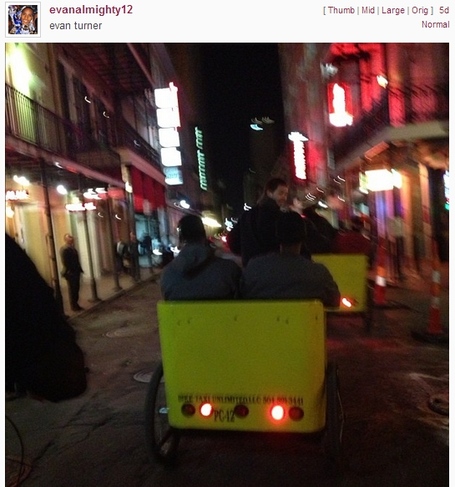 I could use this opportunity to rail against a certain group of Sixers who have the conditioning of world-class athletes yet instead chose to ride pedicabs in one of the most walkable cities in America (New Orleans), but I won't.

Instead, I'd like to make a public service announcement: If any of you ever take a trip to the Big Easy, don't get suckered in by the pedicabs. Bourbon Street (the heart of the French Quarter) is 13 blocks long, and you can LEISURELY stroll the length of it in less than an hour. Besides, walking will allow you to absorb (and possible partake in) the endless debauchery that surrounds you at every angle.

And most importantly: It's hard to flash people and get plastic beads thrown at you while sitting in the back of a pedicab. Not that I know from personal experience... I'm just saying. 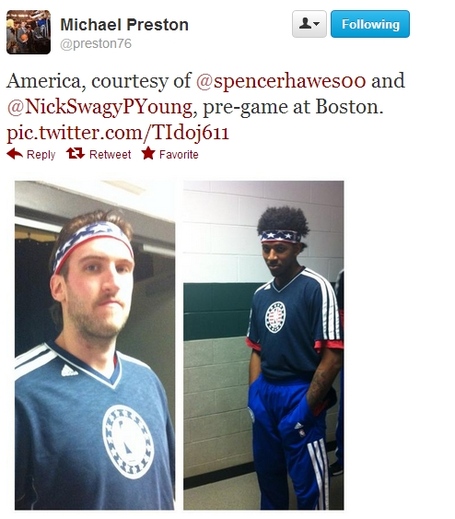 I applaud Spencer Hawes and Nick Young (among others, including Jrue Holiday and his "Captain America-like" wristbands) for making a fashion statement in honor of our troops this past Friday in Boston. And since many of you did a commendable job of destroying Spence for this ill-advised headband in the game thread, I'm just going to link to that post and get out of the way. 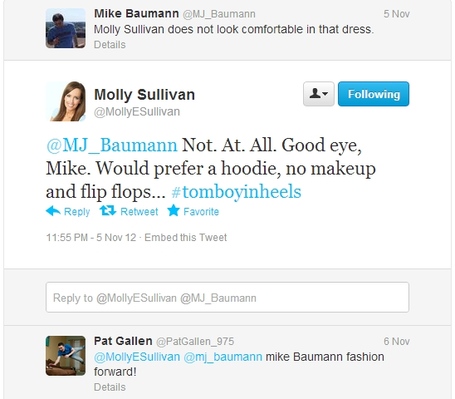 There's no actual Sixers news in the post above, but it is included for two reasons:

1) Sixers' sideline reporter Molly Sullivan (@MollyESullivan) seems like a pretty cool person and a very worthy follow on the Twitter, especially if you're trying to grow your hair out.

2) Not only is Michael Baumann the smartest writer here at LB, but he's also the most fashion forward. He's like the modern day Richard Blackwell.

For weeks, Spencer Hawes has posted pictures of Lavoy Allen wearing Mitt Romney-related apparel. Hawes is an unabashed Republican, and based on a mountain of overwhelming evidence, it appears as though he's convinced Allen ride with the GOP as well.

About a month ago, actress Stacey Dash ("Clueless", "Renaissance Man", "Mo' Money") took an enormous amount of heat for endorsing Romney on Twitter, and spent the past several weeks passionately defending her position.

Fast forward to Election Night, and in the aftermath of the Romney defeat, Allen throws up the buzzer-beating, half-court heave of love and expresses his desire to console Ms. Dash.

We here at LB give HUGE props to Lavoy for putting his heart on the line in such a public way (his post made Deadspin and Ball Don't Lie) for someone who is old enough to be his mother. And who could blame him? Stacey Dash is BAD. How bad? Real bad... Michael Jackson.

When power ranking the best looking 45-year-old women in the world, Dash should clearly be in your top 3. Much like Tom Cruise, she has found a way to reverse the aging process, allowing her to look younger than Allen even though she's 22 years his senior.

No word yet on whether Lavoy's offer was accepted, but until it is, he can always fire up "Illegal In Blue" whenever his heart desires.