The Nuggets are no match for this!

Adam Aron and company never shy away from the glitz and glamor that is NBA pre-game, so it's no surprise that they rolled out the big bucks on Opening Night. Before the Sixers and Nuggets touch butts this evening, the crowd will be treated to an Andre Iguodala tribute video (crying already), a welcoming party for Andrew Bynum, and A GIANT T-SHIRT LAUNCHER LOOK AT THIS THING! 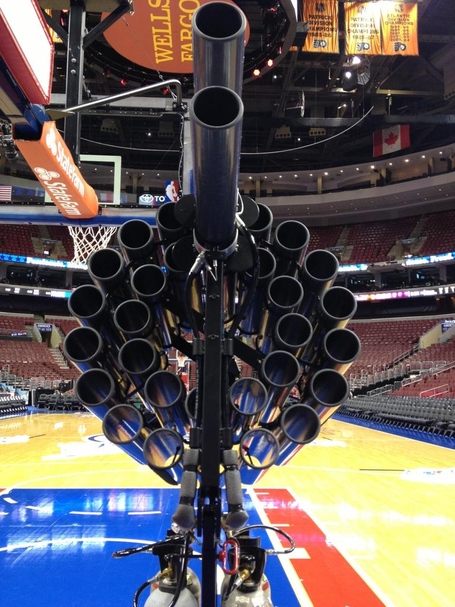 If that's not a weapon of mass destruction, I don't know what is. Good thing Hines Ward isn't going to be there, otherwise I'd be worried about the WFC and also plotholes.

Pretty humorous that Dikembe Mutombo and Moses Malone will be greeting Bynum tonight for a number of reasons. One, Andy will not be playing this evening so he's guaranteed to have as many points as Big Bertha The T-Shirt Launcher Gun Tank and he'll definitely get out-rebounded by Moses. Two, Deke played all of 106 games in Philadelphia, 285 games less than he played for Denver. Where's my Matt Geiger, Scott Williams, and Rick Mahorn entourage? Three, the Sixers famously traded Moses for Jeff Ruland and Cliff Robinson (not the baseline jumper in your eye Cliff Robinson, the played four seasons with the Rapid City Thrillers Cliff Robinson) after which Moses averaged better than 20 and 10 over the next four seasons. He's still shaking his head over that trade.