Can it be called a return if he hasn't played a game outside of Philadelphia yet? Andre Iguodala, he of the last eight seasons on the Sixers, will come back to the Wells Fargo Center on Opening Night, this time wearing the Denver Nuggets gold and powder blue. Iguodala has been a subject of aggravatingly heated debate among Sixers fans over the last decade and his return could spark something of a divide between fans at the game.

We've long supported Iguodala despite wanting him to be traded for the last few seasons and have already given our reasons why booing Dre tonight is extremely irrational. Not that Philadelphia fans or fans in general are known for their forward thinking and sound logic.

Dre has already taken to thanking fans on his website and the Sixers organization will respond by playing a tribute video before the game tonight. Classy moves from everyone -- hopefully the WFC attendees will respond to that.

Now, onto the game action. Sorta.

You know Bynum won't be playing tonight. That sucks. But we can only hope that it's for his future best interest and the best interests of the team long-term. If he misses a couple weeks to a month, it's fine. Any more than that and all everything the team said about his health coming into training camp comes off as irksome. They handled his injury in a very Amaro-esque fashion. I'm sure they're not pleased about it either, but there just seems to be something else to this that rubs me in a non-Aguilera way.

Without the big guy, the Sixers will have a really tough time with Javale McGee and Kenneth Faried inside. Collins has gone on record as saying the Sixers will start with Thaddeus Young and Lavoy Allen, both of whom are either undersized or underskilled defensively against those two players. Expect to see more Kwame Brown than you'd like. On the other hand, Spencer Hawes covering Faried and his pickaxes would be consistently hilarious.

Recently-minted Ty Lawson is the kind of quick, strong, less fat Sherron Collins-y guard that gives Jrue Holiday trouble. If you recall, the Sixers took Holiday in the '09 Draft while the more proven Lawson was still on the board. Jrue is a career 3-1 against Ty, but he's scored 5 points or less in two of the four meetings. Look for a newly aggressive Jrue to try to take it inside against Lawson tonight.

It's going to be awesome seeing Evan Turner and Iguodala match up against each other. Here's what Evan had to say about it.

Turner on Iguodala: "There’s never a strange moment with Dre because he’s always so weird, you know?" #sixers

I love this Nuggets team. I can't say that enough. I have Lawson, Iguodala, and Danilo Gallinari on both of my fantasy teams and Javale on one. I can't get enough of them. George Karl is going to have these guys playing killer defense and getting out in the open court and taking the ball to the basket. They don't have a star player, true, but providing Faried doesn't regress and Javale doesn't cut his arms off for fun, I think they're a top 4 team in the West.

The Nuggets are our friends. Also: Evan Fournier and Tanner really get along well. And I'll be over here pining for Quincy Miller. Quincy! Quincy!

I hate Andre Miller. The Anti-Nug.

Dunno. Weirdness? I'm looking forward to seeing what Dorell Wright and Nick Young can do. Obviously a big game from Evan Turner or just any game at all from him would be pretty cool. The Sixers are at home and player intros should be filled with Adam Aron's exclamation points, but I'm not sure they're good enough to beat a strong Denver team without Bynum.

Hit up Denver Stiffs for their perspective.

And a reminder to all to get tickets here. There are still some available and you'll want to be there just to watch the Nuggets do awesome, Nuggety things. Here's last year's chart for pricing. 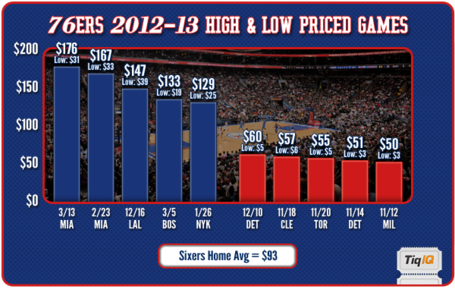 Let us know if you'll be there tonight AND if you'll be booing or punching out the booers around you. If you say "booers" enough, it sounds like you're saying "Brewers" with a speech impediment.