Between birthday celebrations and this past weekend's Powerhouse concert, the Sixers have been pretty busy over the past few days...

Welcome to the latest edition of the Sunday Morning Shootaround. This week, we'll look back at Evan Turner's birthday festivities, take a walk down memory lane with Dorell Wright, and tell you which rapper received the dreaded vote of confidence from the least swaggiest player in the Sixers' roster. 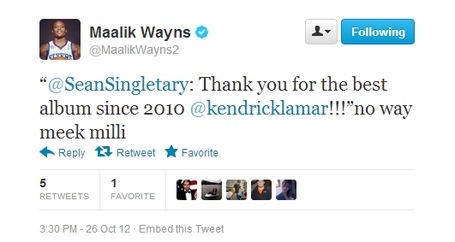 There are two things wrong with Wayns' response. For starters, Kendrick Lamar's "good kid, m.A.A.d. City" is far and away the best hip-hop album in recent memory, and it isn't even close. Second, Meek Mill's "Dreams and Nightmares" isn't released until Tuesday, so unless Wayns is openly admitting to illegally possessing copyrighted material, then how is he able to even make the comparison? That said, he probably just downloaded the bootleg like the rest of us. YOLO.

More importantly, this shows a troubling lack of judgment on Wayns' part, one that hopefully doesn't carry over onto the basketball court. When Wayns makes a completely boneheaded play at some point during the season, you'll know why.

This tweet came during Friday's Powerhouse concert at the Wells Fargo Center headlined by Philly native Meek Mill. From what I can tell, half of the Sixers' roster was able to attend said event thanks to the efforts of one Michael Preston.

But no sense in burying the lede: Hawes' endorsement of Meek Mill means that it's no longer cool to like Meek Mill. It's a sad indictment of an artist whose debut album hasn't even hit store shelves yet, but it is what it is. Hopefully, Hawes doesn't tweet his support for Kendrick Lamar any time soon. 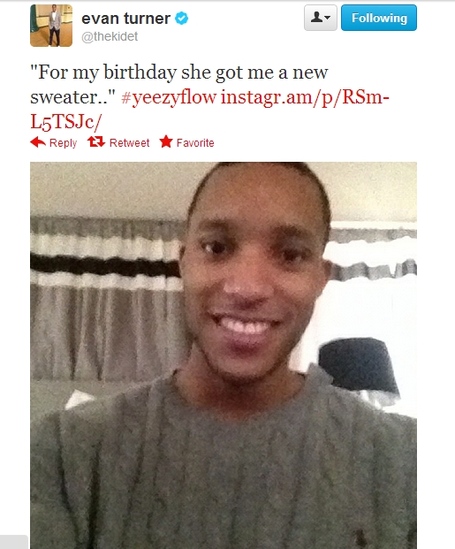 Evan Turner took a playful shot on Twitter at his girlfriend after she bought him a sweater for his birthday on Saturday. The end of the Kanye West lyric that he's quoting? "Put it on, give her a kiss, and tell her, 'Do better.'"

More importantly, Turner's post raises an important question: What do you buy a millionaire for their birthday? Most of us have people in our lives for whom it's incredibly difficult to shop for, but that difficulty is only multiplied when the person in question makes more in a week than the average person does in a year.

If the future Mrs. Evan Turner had made a public appeal, I'm sure we all would have chipped in and helped her by some more shooting lessons from Herb Magee for her boyfriend. 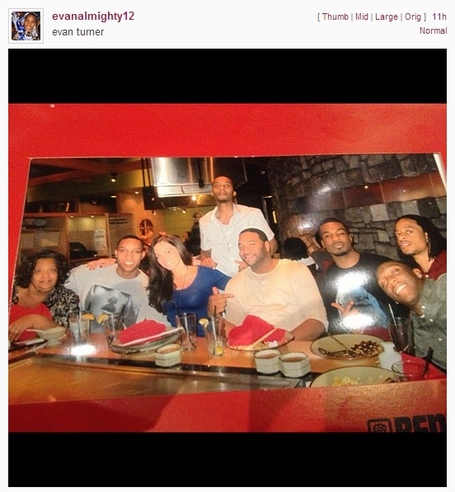 ET's Birthday Extravaganza 2012 continues as he and his friends/family enjoyed a lovely dinner at Benihana's. For some reason, professional athletes seem to find Benihana's irresistible - I'm not exactly sure why. Maybe it's the fact that the hibachi chefs are pretty good at throwing a piece of shrimp into your mouth from 15 feet away, or perhaps it's the smoking onion volcano trick that does it. If anyone can answer that question, please let me know.

Personally, if I had that much money, I'd rather go to a place like Fogo de Chao where they constantly bring you meat roasted over an open flame until you tell them to stop. Or better yet, I'd have Fogo de Chao come to me, and I'm pretty sure that I could make that happen since I would be a millionaire. 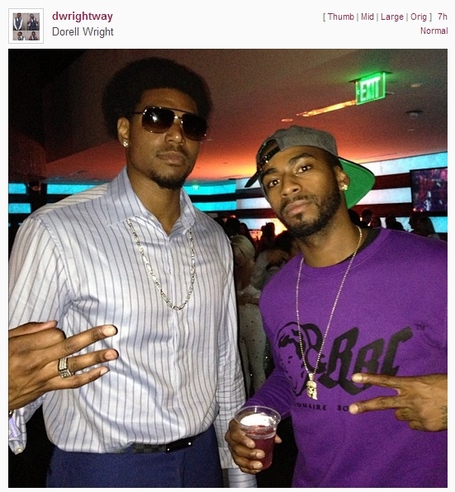 The man on the right is Dorell Wright. The man on the left is Andrew Bynum, though you may not recognize him since pictures of him with his Sixers' teammates are more rare than Yeti sightings.

A number of Sixers got together at Xfinity Live last night to celebrate since both Turner and Bynum share the same October 27 birthday, and this photo is presumably from that gathering. My girlfriend's reaction to Bynum when I showed her this picture? "He looks like a 1970's pimp."

According to unconfirmed reports, the three fingers that Bynum is holding up is in reference to how many more lubrication sessions he needs before he hits the practice court again. Clear Eyes, Full Hearts, Can't Lube... But You Only Turn 25 Once. 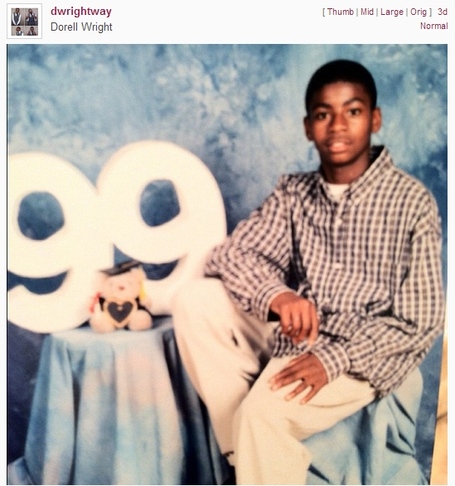 I bet that if you talked to 14-year-old Dorell Wright on the day that this picture was taken, he thought he was fresh to DEATH. Old Navy button down with the crisp khakis, probably a couple of days removed from the barbershop - you couldn't tell him NOTHING, despite the fact that he's posing with a stuffed teddy bear.

If you don't have at least 17 embarrassing pictures of yourself looking like this during your middle school days, then you haven't lived life. 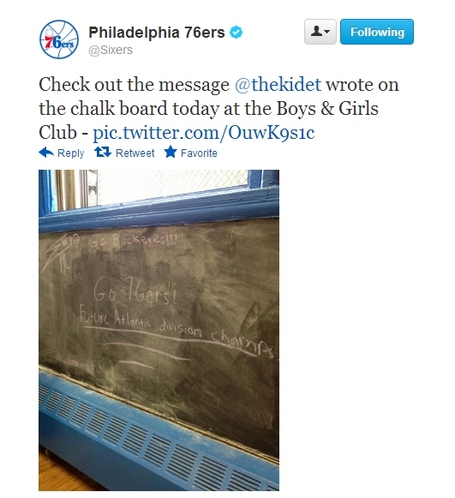 It's clear that Evan Turner wrote this since he's the only person within a 100-mile radius of Philadelphia who cares about the Ohio State Buckeyes. And I understand that writing on a chalkboard can be difficult, but why is Turner's handwriting reminiscent of a 9-year-old kid?

Furthermore, he capitalized "Atlantic" but not "division", and he put THREE lines underneath of it to emphasize the importance of what he just wrote. Five minutes later, the kids erased the board and started working on fractions.