Which Sixers' stars look like famous actors? Why is the team's CEO riding the subway in NYC? And why is Arnett Moultrie carrying around a plush dog pillow? You've got questions, we've got answers...

Welcome to the inaugural edition of the Sunday Morning Shootaround, Liberty Ballers' recap of the week that was on the Sixers' social media front. Every Sunday morning (or whenever we recover from the previous night's hangover), we'll get you caught up on the best Sixers-related tweets, Facebook posts and Instagram pics from the past seven days. So without further ado... 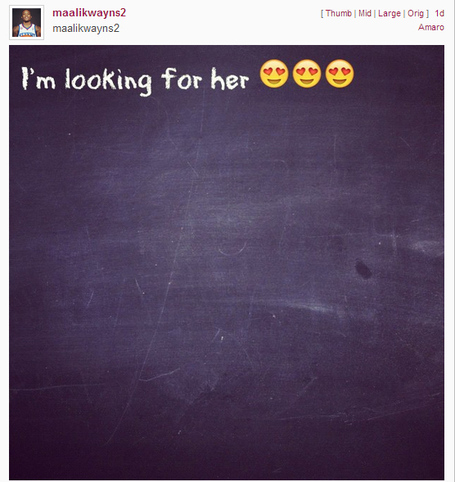 If by "her", Maalik Wayns is referring to "the person who will tell him to stop penetrating into the lane with no idea of what he plans to do with the basketball once he gets there", then I hope he finds her ASAP. If not, then the Sixers’ rookie may want to settle down a little bit. That said, these are the types of posts that will cause all of the future "Basketball Wives" on his followers list to reveal themselves as the gold diggers that they are. So if this is Wayns' ploy to narrow down the list of women that could potentially be "her", then the Sixers' rookie is wise beyond his years. 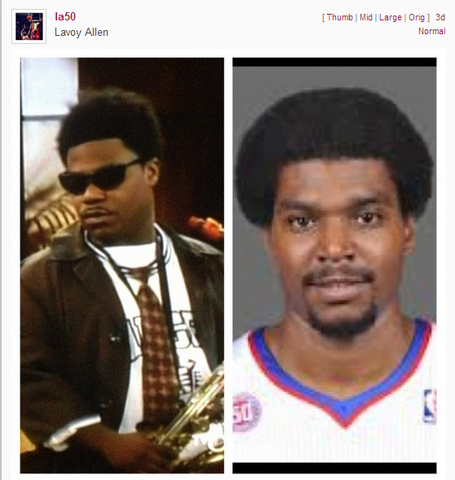 Most of us love comparing our friends and loved ones to famous people, and Lavoy Allen is no different. In this post, he played the look-a-like game with Andrew Bynum and Tracy Morgan (who is playing Hustle Man from the TV show 'Martin' in this pic). This one is a little bit of a stretch, but it's far better than the Bynum/Frederick Douglass comparisons floated out there a few weeks back. 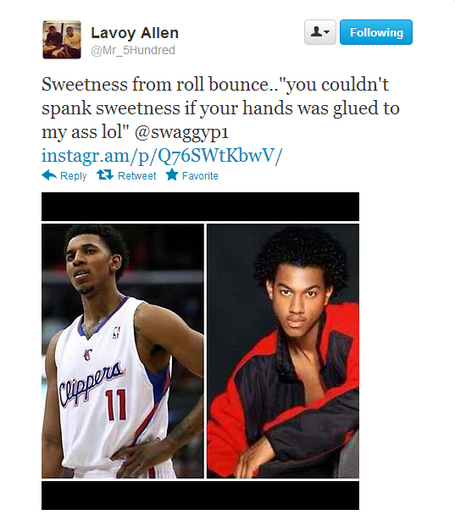 This comparison is also courtesy of Lavoy Allen, and while the picture (hilariously) speaks for itself, a little explanation may be in order...

I'm sure you all recognize Nick Young, but for the uninitiated, the man on the right is actor Wesley Jonathan. Long story short, he's the guy who casting directors settle on whenever Nick Cannon is unavailable for a movie. Jonathan has "starred" in such seminal flicks as "Steppin", "Roll Bounce", and the Razzie-worthy, basketball-themed "Crossover", which is ranked on IMDB as the 35th-worst movie of all time. Instead of casting Jonathan, the director should have gone with his gut and chose Young. At the very least, Young would have made "Crossover" the 35th-most swaggiest movie of all time. 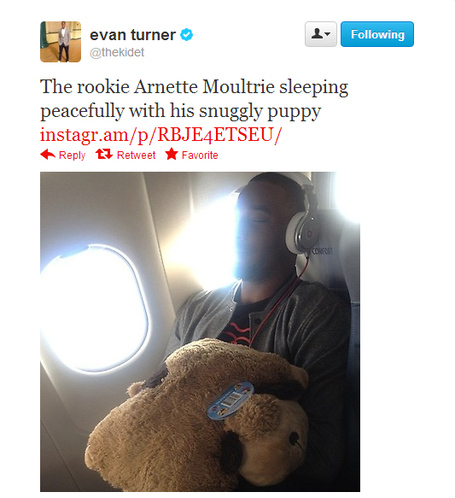 As a rookie, Jalen Rose had to make late-night runs to CVS to get... certain items for Dikembe Mutombo whenever "adult situations" arose. Denver's Jae Crowder has to take the Nuggets' jerseys to the cleaners after road games. Meanwhile, Sixers' first-year players Arnett Moultrie and Maalik Wayns are only forced to carry around Pillow Pets and backpacks adorned with Dora the Explorer and Justin Bieber. And I don't know about you, but that Pillow Pets Dream Lites Dog that Moultrie is sleeping with looks fantastically plush (and is only $29.99 at Bed Bath and Beyond).

I'm sure this is only Phase I of the Sixers' rookie hazing, however. As soon as we get word on the impending dance contest, we'll be sure to pass it along. 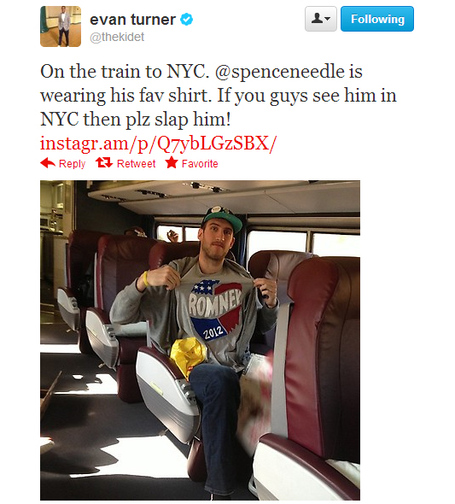 If nothing else, Spencer Hawes makes no secret of his Republican leanings. When he's not live-tweeting pro-Mitt Romney sentiments during Presidential debates, he's wearing "Obama Hood" T-shirts to practice. And if you think Hawes' position is unpopular, you might be surprised: In a recent survey conducted by ESPN The Magazine, 61.5 percent of NBA players said that they planned on voting for Romney in the upcoming election.

The world of politics divides the rest of us as well, so as you might imagine, the comments on that photo above are GOLDEN.

The following is a public service announcement to directed to Sixers CEO Adam Aron: Never do that again.

Jay-Z can get away with this because he has a phalanx of bodyguards that will protect him with Secret Service-like precision. You, on the other hand, were probably just straphanging it with Michael Preston. And while you and your PR director appear capable of handling yourselves in a little dust-up (despite Mr. Preston's unfortunate wardrobe choices), it could have turned into a really ugly scene if the people on the train knew how much you were actually worth. Besides, if something were to happen to you, we'd have no one to direct our Naughty By Nature concert requests to.