Andrew Bynum And The "So, You Have A Big Man" Series, Vol. 2

Share All sharing options for: Andrew Bynum And The "So, You Have A Big Man" Series, Vol. 2

When I was scanning teams to highlight for the 2nd Installment of the "So, You Have A Big Man" series (and of course, the title made me think of "That Don't Impress Me Much" by Shania Twain), plenty came to mind, but one stuck out: the Los Angeles Lakers. It’s pretty simple logic, after all. The Sixers are excited to finally have a big man to build around, and since Andrew Bynum had to come from somewhere (even though some Lakers fans would suggest "day care"), let’s see how the Lakers used him.

There is specifically one aspect of Los Angeles' attack that can be easily transferable to the Sixers, the "big to big" passing. One thing the Sixers will have in common with Bynum’s Laker teams is a seven footer who can pass the ball to Bynum.

Now in no way is this meant to compare Spencer Hawes to Pau Gasol as a complete player, because obviously they aren’t even close. In fact, I personally don’t think very highly of Hawes as a player at all because of his major defensive deficiencies. But if Spencer can do one thing well, it’s pass the basketball. And as the great Kelly Dwyer points out, Hawes’ assist ratio was better than Gasol’s last year.

The difficult but necessary exercise of comparing the players’ situations seems to come out to a wash as well. On one hand, with the Sixers having the worst shot selection in the league, Hawes’s passing skills weren’t utilized to their maximum ability. Then again, he played alongside jumping jacks- Andre Iguodala, Thaddeus Young, and to a lesser extent Lou Williams and Jrue Holiday- who possessed the type of athleticism that the Lakers really didn’t have. This season Hawes will have Bynum, the type of strong post player with excellent instincts at and around the rim that meshes perfectly with his passing ability. That is, if they can play together.

With the arrival of Bynum, Hawes should have the ability to garner much more high quality assists, from either hitting Bynum down low or pitching out to three-point shooters whose defenders help on Bynum. Let’s look at a few ways they can accomplish this:

1. The High-Low: I forget where I heard this (maybe Ric Bucher?) but someone once nicely described the advantage the Lakers had playing the high-low game when they not only had Gasol and Bynum, but also 6’11 Lamar Odom: "It’s as if they are playing on the 12th floor when everyone else is on the 10th." And that is the basic philosophy of the high-low offense, utilizing one big man who can see and throw over the top of the defense to another big man to create a decent shot at the rim. From what I saw of Pau’s assists, the Lakers didn’t use the basic set a ton last year. But with Hawes’ penchant to trail the play (alright, he’s simply not very fast), the Sixers could use this set a lot when they are in the game together. 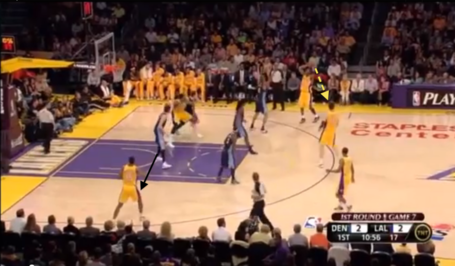 In this example, Kobe Bryant brings the ball up and Bynum is fronted by Mozgov. Kobe wants to go to Bynum on the block, but he is fronted while Gallinari provides weak-side help, all but dismissing Ron Artest in the weak-side corner. 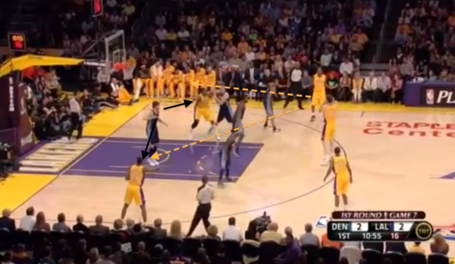 So Bryant does the smart thing, swinging the ball quickly to a trailing Pau Gasol. Basketball is a game of angles, and with this pass Bryant does two things: 1. He changes the passing angle to Bynum from non-existent to excellent. 2. He forces Gallo into a decision. Does he stay to help on Bynum or does he drift back towards Artest? Because now, Gasol can easily make the skip pass for a corner three if Gallinari stays with Bynum. 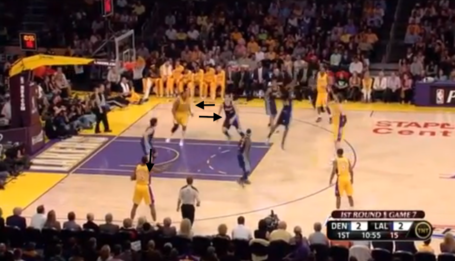 Gallo tries to play both and drifts over little towards Artest, which makes Gasol’s read an easy one. He lobs the ball to Bynum, who has used Mosgov’s momentum from trying to fight over top against him and given a little nudge (won’t be called) to create plenty of space. 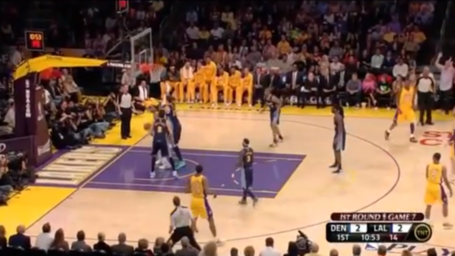 Even with a bad pass by Gasol, who would normally throw the ball right at the rim for an alley-oop, Bynum still has the ball right under the basket. He is going to score more often than not in this position.

That is the basic play, but here is video of a few other times the Lakers ran it:

The video shows how many different ways the Sixers can potentially get into a high-low with Hawes/Bynum. The options, in the order of the video (the play above is first), are:

2. High-low can be run out of "Horns," with the ball-handler using a quick screen from Bynum, who dives diagonally to the basket, and swinging the ball to Gasol (Hawes).

3. It also can be run against a 2-3 zone, with Gasol catching the ball at the foul line in the defense’s soft spot and Bynum fighting for position underneath.

4. You can even clear out a whole side for Bynum and have the luxury of a 7-footer to throw the ball over the top to him at what would be an awkward angle for smaller players.

2. The Pick and Roll to free the passing big: Bynum is absolutely devastating on the weak-side of a play for one simple reason: His defender can’t really leave him. If Bynum is left for even half a second, which is how long even good rotations take, all the offense has to do is throw the ball high and he’ll get it.

One way the Lakers found a way to force rotation was having Gasol set a ball screen and slipping it quickly. Let’s take a look at one example of how the Lakers ran a play to perfection against Bynum’s current teammates: 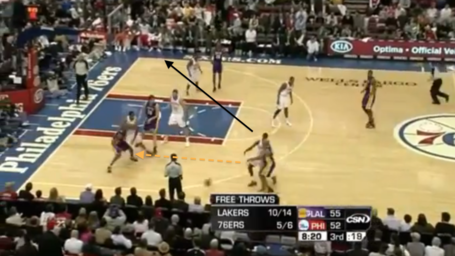 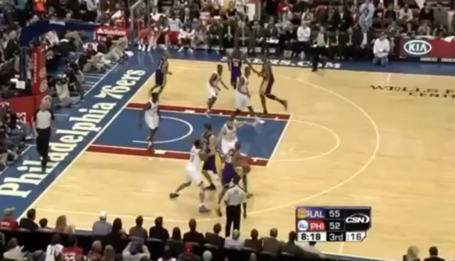 In the first two shots, the Lakers initiate the offense by having Derek Fisher hit Bryant with a post-up. Fisher then proceeds to clear out to the weak-side corner. Gasol sets Bryant a quick ball screen, one where he makes good contact with Andre Iguodala. 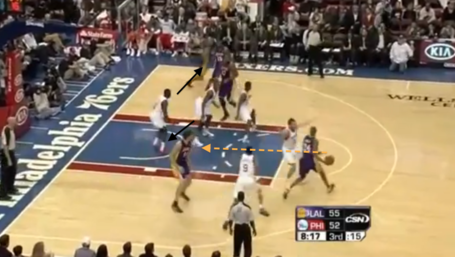 Gasol’s effective screen sets everything in motion for L.A., forcing Hawes to pick up Bryant while Iguodala recovers. Gasol slips towards the basket and Kobe hits him with a nifty pass, which forces help from Lavoy Allen, Bynum’s defender. 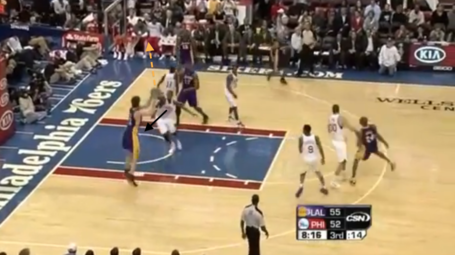 At this point, Gasol knows what he’s going to do: Throw the ball to the rim, and fast. Because Allen has to help, nobody big (or at all in this example) is there to rotate onto Bynum. It’s an easy two points. 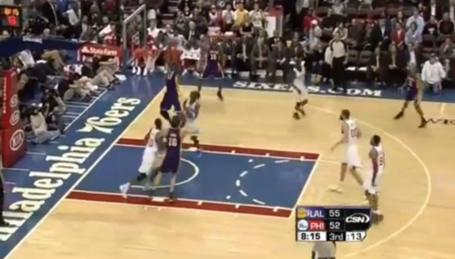 A couple of things need to happen for the Sixers to free Bynum like this as often as the Lakers did. The most important is a complete overhaul in Hawes’ screening philosophy, or lack thereof. First, Hawes needs to start rolling towards the basket instead of his patented flare to the corner. While he is not as fluid as Gasol is with the ball in his hands, Hawes shot a respectable 45 percent from 3-9 feet last year, so he’s a threat to score from there. Oh, and it wouldn’t hurt if Hawes started making some consistent contact on his screens either.

Here is video of a bunch of different times the Lakers ran this play. Now the one thing that sticks out in most of these videos is how much attention Kobe garners off the screen, which won't be the case in Philly. This is where the two guys I would want as the pick and roll ball handlers, Jrue Holiday and Evan Turner, have to step up. Both Jrue and Turner really need to attack the defensive big men so Hawes can get a free run the basket. And if the defense goes under the screen (which they should initially), Jrue (like Chauncey Billups from three) and Turner (like Kobe here in the mid-post) need to make them pay by taking and making open shots.

Here is a video of something mentioned in the general high-low section that the Lakers went to the well with a few other times. The same principles as the last play apply, except Bynum is on the strong side and sets a ball screen. He rolls all the way to the rim and Pau walks up to the foul line from the opposite block to receive a pass. The result is a high-low action, which produces defensive confusion in the paint.

This read is the final step in the play’s evolution, getting the shooters involved. When both defensive wings sag in, three point shooters (and not Fisher’s awful foot-on-the-line jumper) should be on the wings waiting for Hawes’ pass.

Can It Be Done? I realize that this proposal is a leap of faith, considering Hawes hasn’t played a minute at power forward in a Sixers uniform. This became a fairly large rallying cry for front-office detractors and puzzled fans alike when Doug Collins announced his intentions to start Hawes at the 4 in July. So what has changed since? Oh yeah, the Sixers upgraded from Kwame Brown to Andrew Bynum. That’s what.

Defensively is where the major problems would occur with a Hawes-Bynum frontcourt. Hawes, simply put, is not a good individual defender, struggling with both speed and strength, which is not a great combination. It would be a matter of mixing and matching with the right lineups, and remembering what Kevin Garnett did to Hawes in the playoffs last year, ones devoid of much quickness or outside shooting. (for example, the pairing would most likely be a disaster against any competent stretch 4s). Looking through the conference, you could give a Hawes-Bynum frontcourt a chance against the Nets, Bobcats, Cavaliers, Magic, and Wizards starting frontcourts (so yeah, mostly bad teams). But obviously as teams dip into their benches, more opportunities could arise.

As much as the idea of Hawes potentially being in Philadelphia for another two years doesn’t excite you, Bynum is the perfect fit to play with him offensively. The fact that Hawes doesn’t have much interest in playing inside can finally be used as a positive, because now that is Bynum’s real estate. Playing the frontcourt pairing alongside a ball-handler (Holiday, Turner) and two shooters (Richardson, Holiday, Wright, Young), the Sixers might be able to give teams a different look for 10 minutes a game.

It’s all about finding the right defensive matchup for Hawes, which luckily for the Sixers, is something their coach is quite capable of.