SB Nation Blogger Conference: Basketball in the Time of Lockout

This is a week late, but life intervened at my do-gooding intentions trying to get this out last week. Enjoy.

Take the wind-whipping joyride of the first Hangover, subtract a baby, trade Heather Graham for me and add about a hundred of your favorite SB Nation bloggers and you've got yourself the first annual SB Nation Blogger Conference. Or as Twitter knew it, #SBNBC.

Despite coming up empty at the tables, it was one of the more enjoyable adult weekends I've been apart of in my ignorantly short lifetime. Though considering these are sweatpants/body odor/mom's basement blogger types we're talking about, maybe adult isn't the right word. But one word was basketball, and in the face of the soul-crushing depression of the L*CK*UT, some basketball was actually talked (and played!).

Hit the jump to find out how many bloggers showed up to the Sunday morning basketball game.

Friend to LB and ambassador to the dot com, Rohan of At The Hive, picked me up from work in Beverly Hills on Friday in the heavenly part of Rush Hour where traffic is so terrible that you're actually spooning with the car in front of you. After dancing this way and that on I-10, we were off for what was to be about a six-hour drive from LA to Vegas, complete with a stop at In-N-Out Burger and copious amounts of the Early 90's Rap Scene.

After checking into the Renaissance just off the Strip and receiving our SBN swag, Rohan and I met up with the fabled Frank Madden of Brew Hoop fame at the hotel bar. After an arm-wrestling round robin failed to determine which of our three teams (Hornets, Bucks, and whatever team I write for) was the most mediocre, we talked some shop and speculated about the next day's events. Frank also lectured us ripe 'uns about the strip club scenes in both Vegas and New Hampshire, but that's a blog post all to itself. We retired a few hours later to our bed(s), with Rohan and I pop quizzing each other on the names of the lesser-known SBN blogs mid-cuddle. Needless to say, I slept like a muskrat on Valium.

The conference itself was a nice mix of information, interaction, and quite a bit of ego-stroking that always tickles my fancy. We got to hear ESPN baseball prodigal son turned SB Nation golden boy Rob Neyer talk about writing style and usage (He looks exactly like my Uncle Jim. It's uncanny.), SBN creator Tyler Bleszinski (of Athletics Nation) dish out the goods about the future of the company, and CEO Jim Bankoff lambast our competitors for simply not being as awesome as we are. All in all, a great time. I got a chance to meet fellow Philadelphians, WholeCamels of The Good Phight and Travis Hughes of Broad Street Hockey, who were surprisingly not dressed in sweatpants and dankness, and to my knowledge their mothers were nowhere in sight. WC even managed to keep his flying fists at bay with Martin from the Braves-centered Talking Chop seated a mere five feet away.

But easily the best part of the day was splitting into our league groups and brainstorming ways to get through this torturous time. Leading our haphazardly-formed circle was Bright Side of the Sun's Seth Pollack, also the NBA League Manager and Russell Westbrook hater. Filling it out were as follows: Dave from Blazers Edge, Steve from Clips Nation, Chris from Silver Screen & Roll, Matt from Blog A Bull, Nate from Golden State of Mind, Nugget Nate and "Mr. Bottle Service" Andrew from Denver Stiffs, Frank, Rohan, and myself. Quite a testosterone-filled bunch if I do say so myself. These are some supremely talented dudes that I have the pleasure to write with and meeting them in person tripled my respect for their writing. Having legitimate careers with wives (!) and children (!!!) in addition to running a blog can run anybody into the ground but these are some passionate brosephs and inspired the hell out of me to keep this up.

Better were the few hours over dinner where all of us sat at a Bar Mitzvah table, swapping stories and trade proposals and Lockout ideas and commenter banning tales. It was magical. Matt summed it up best with a Tweet that we all received to our cell phones mid-conversation that was met with nods and understanding. 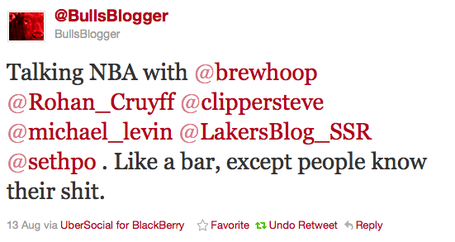 Especially in LA, it's hard to talk to people who actually know anything about, well, anything. But even back East, a legitimately worthwhile conversation with another basketball-aware human being comes along as often as a Marreese Speights pass. Talking shop over free food and drink in Vegas with some of my favorite formerly faceless people took precedence over early-evening debauchery and table-hopping. Those precious few hours were enough to have me commit to an appearance next year if location and bank accounts comply.

The morning after a night on the town where I gambled with minimal funds to a real person but a life savings to a recent college grad is not usually one filled with a basketball pickup game. But with people's flights and real lives harkening them back to civilization, 8 AM was the only haven for one last go-round between internet buds. Lakers Chris pitched the idea to the whole company - "Basketball at 8!" - but only five of us showed. In 100 degree desert heat (between the hours of 8-10 AM, this is the Devil's basketball), with a slanted court and half-rims (literally, half of the rim was not there), Chris, Steve, Rohan, Warriors Nate and I ran a few games of 2-on-2. Luckily the vigor of youth won out for Rohan and I more often than not, but it was less of a basketball game and more of a "who can hold off from passing out and vomiting the longest" game. Good thing my vomit gene and basketball gene both come from my mother's side.

And after a shower and a last Vegas breakfast, it was back West with us to fight through the agonizing heat and agonizinger (take that, Neyer) traffic. A few Chipwiches later and that was the end of the first SBNBC - a great success by all accounts. Last weekend made it clear that SB Nation is the best there is for sports blogging and I speak for the entire LB staff in saying we've got a lot to work on to measure up with some of the other NBA talent under the SBN banner.

The best interface, the best writing, and the best communities - maybe I've sold out and cower in the face of free food and drinks company, but I'm pumped to stay here a while and talk basketball with you good people.