With the gloom and doom of the approaching NBA lockout increasing with every depressing story and tweet around the blogosphere we have some good news for you today at Liberty Ballers. Three new t-shirts have been added to our official Liberty Ballers store!

From the great minds who brought you classics like the 'Rock Me Thaddeus', three different versions of 'The Villain' shirts, named after number two pick Evan Turner, along with the 'I survived the Eddie Jordan Era' (which Derek wore as an undershirt the night we moved up in the lottery) and the 'Fire Eddie' tees, we present to you two Jrue Holiday t-shirts and a new, general Liberty Ballers tee.

Take a look at the new swag after the jump, equipped with links purchase. 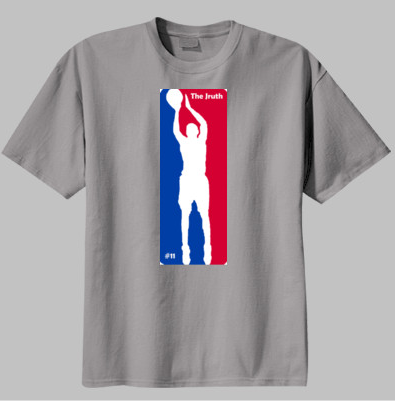 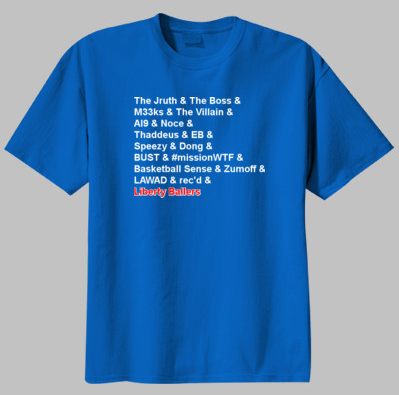 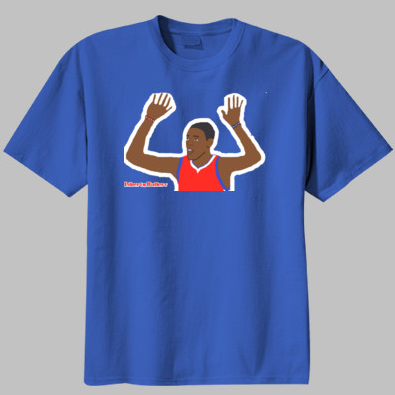 With help from @Aykis16 from The Pick and Scroll, comes the Jrue Holiday logo. Sleek, sexy, and suitable for all ages. The shirt comes in white, grey, blue and red. It also comes in sleeveless for all you fools who like to show off your gunz. On the logo reads "The Jruth" and Holiday's number 11. "The Jruth" is a corny, uncreative nickname we dubbed Jrue with a while ago, and it just kinda stuck. Jrue endorsed the nickname in this infamous YouTube clip, although rumor has it, he called it the corniest nickname he ever heard.

An idea I shamelessly stole from Posting and Toasting, who undoubtedly stole it from someone else, comes the t-shirt with nicknames of various Sixers players, along with a couple go-to sayings and phrases we consistently use on the blog. Not as sleek, or sexy, but a must-have for all the loyal Liberty Ballers out there, who love Dong.

Visit our site glossary to brush up on any terms you're unfamiliar with.

Inspired by this celebration Jrue busted out during a regular season game against the Clippers, followed by the same celebration performed by Thaddeus Young AND Jrue Holiday. Just when we all thought the iconic 'raise the roof' gesture died in the 90's it sort of became to signature move for the young Sixers, thanks to Jrue Holiday, who was actually born in the 90's. For those who can't read the small text in the bottom left corner, it says Liberty Ballers. Another sleek and sexy design for all the Jrue + Thad + Sixers + 1990's fans out there. Also available in red, black, blue, grey, and sleeveless.

Buy one, buy all. You know you want to. And we plan on having numerous t-shirt giveaways @Philly76ersBlog on Twitter throughout the summer, so be on the lockout ... I mean lookout.