Share All sharing options for: Defending the 2011 NBA Draft Class

Everyone from Chad Ford to Howard Eskin to that awkward heavy breather from your office is running around saying that the 2011 NBA Draft is the worst one in years. You may as well exchange your pick for a couple basketballs and a bag of chips because you won't get anyone valuable in this draft. I'd go so far as to say each member of the draft class is a terrorist and should not be allowed within 100 yards of an NBA basketball team.

That's a load of Dong.

What this draft class does not have is the two or three blue chip prospects that you can say will definitely be a franchise cornerstone for the next 5-10 years. Kyrie Irving comes close, but because he only played 11 (fairly spectacular) games at Duke, there's not as much certainty there as people had with Andrea Bargnani, Kwame Brown, Kenyon Martin, and Michael Olowokandi.

This is not the worst draft class of all time. There's a distinct lack of high level talent to hang your hat on, but if we're calling a guy like LeBron first tier, and Irving second tier, then there's a veritable Kapono-load of 3rd tier prospects to be had in the draft. Drafting a starter isn't the likeliest thing for a team picking in the late first/early second, but because of the depth of this draft, it's entirely possible and in some cases, probable.

Lucas Nogueira, Josh Selby, and Justin Harper all have a modicum of upside that will offer teams picking from 25-35 a good shot at becoming a starter someday. And that's ten picks after the Sixers go. If there was ever a time to not stay in the Sixers draft slot, it's now. Because they can get the same level of talent from pick 10 to pick 45, they need to either trade up for one of the top 3 bigs (Kanter, Valanciunas, Biyombo) or trade down, nab another pick and shed a bit of salary while getting one of the bigs at the end of the first (Nogueira, Keith Benson, Trey Thompkins). Having young, high-upside guys at the end of the bench or in the D-League (Jeremy Tyler, Greg Smith) will be much better than the old, decrepit bodies we saw in suits last season (Tony Battie, Jason Kapono, Dongaila).

Here's an awesome graph I stole from BrewHoop in their three-part series about the NBA Draft Lottery. 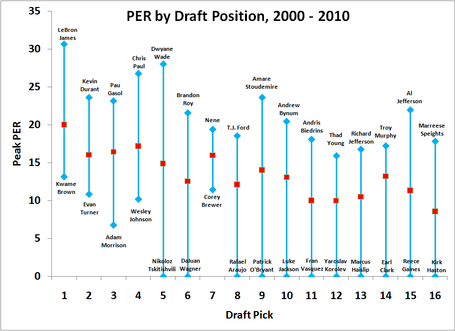 While PER isn't the greatest measuring stick of talent, it's the easiest to go with here and shows that even those top few guys that are supposedly sure-thing prospects are often the very opposite. Depth is easily this draft's biggest strength, but there's a healthy dose of big men to be had here as well. The Sixers should, with the right bit of maneuvering, come out with an integral piece or two to the team's success for the next few seasons.

So this is me going on record as saying this draft class will surprise some people, it's got plenty of indie cred, and from a Sixers perspective, could be the perfect time to gamble on one of those top 3 big men when execs are so low on the quality of the talent pool. We've got four weeks til the draft. Get excited.