The Miami Heat and the other big three hold off Sixers late surge, win game 1

Share All sharing options for: The Miami Heat and the other big three hold off Sixers late surge, win game 1

In the end, the Miami Heat and company were too much for the Sixers to handle.

The Sixers had perhaps their best defensive game of the 4 against the Heat this season, particularly late in the 4th quarter as Iguodala and company locked down and allowed the Sixers to trim the lead to 1.

A 12-0 run by the Sixers midway through the 4th quarter made the game interesting.  A pair of Jrue Holiday three pointers were sandwiched between three Thaddeus Young scores as the Sixers made a game of it.

The game started off similarly, with suffocating defense combined with great offensive execution allowing the Sixers to jump out to a 31-19 first quarter lead.  That lead was canceled out by a 35-18 second quarter advantage by the Heat which saw them shoot 14 free throws in the quarter.  That, combined with a Sixers offensive dry spell in the second and third quarter fueled by the Heat zone defense and a slowed down tempo put the Sixers in a big hole.

A few thoughts after the jump.  I'll try not to complain too much about the refs.  Before that, take a look at ESPN giving the Sixers absolutely no love...nor even acknowledging their existence (click to enlarge). 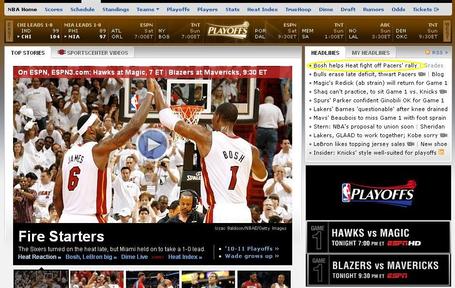 Overall, if the Sixers are able to hold the Heat to 41.9% from the field, they may be able to make a series out of this.  On the list of question marks, most of them were somewhat answered for the positive.  The second quarter was infuriating and the ending disappointing, but the day wasn't all bad.
Player of the game: Elton Brand
Boxscore
Next up: @Miami, Monday, 7 PM, TNT
Game 1 Coverage:
Sixers offensve vs Miami Heat defense preview
Defending the heat: A look at tendencies and matchups
Sixers/Heat game 1 links: playoff style
Sixers half court offense not ready for prime time
Sixers vs Heat: The ultimate viewing guide