This is your trade deadline day thread to discuss all nonsensicalities and hullabaloo. We'll stop by and update it with any significant (or insignificant) links and stuff.

So far all we have is this video interview of Rod Thorn, where he says:

I think we'll do something, but it won't be major.

If we can add a big player who might be able to help us, we'd certainly look at that.

Update (10:30 AM): According to Ken Berger of CBS Sports, Andre Iguodala is still off the table. According to the biting Matt Moore, "Because, really, a three-week win streak is what you want to make decisions off of." Hopefully, as Jordan said, off the table still means listening to offers if they come their way. Also, Reggie Evans is apparently available. Meh.

Update (11:55 AM): Adrian Wojnarowski confirms earlier report, claiming Iguodala is "out of play". Also says Kapono will likely be bought out. Tom Moore informs us no Sixers were held out of practice.

Update (3:54): Marc Stein says the Sixers and Rockets were in "deep" discussions – Battier for Speights and Kapono.

We also have these two articles from Kate Fagan. Enjoy the final hours on the trade machine, and try not to hurt each other.

For inspiration, here's a picture I took one time of the sunrise in Israel after hiking up Masada before dawn. 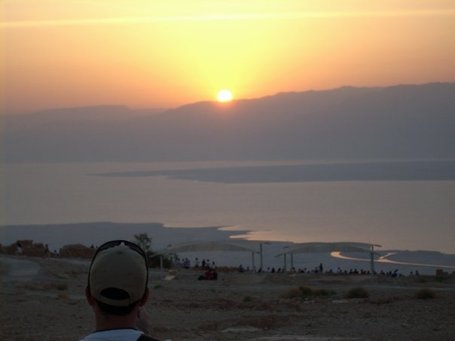 That is not my head. Inspired?