One of the major concerns on Nikola Vucevic coming out of college was his questionable ability to defend the pick and roll game that is so prevalent in the NBA.

While we're only two (exhibition) games into the season, the second game against the Wizards did provide a glimpse of the problems Vucevic will face. After the jump I'm going to take a look at his technique defending the pick and roll, and how (if at all) he can overcome his athletic limitations.

This first clip is a pick and roll with John Wall and JaVale McGee. If you watched this game, you know how this one ended up, but I'm going to walk through it anyway. 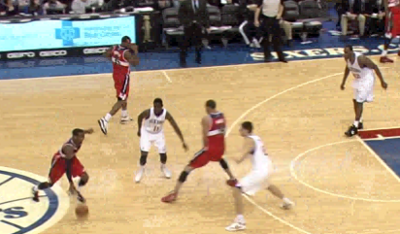 McGee sets the pick and the first mistake is actually not by Vucevic but by Jrue Holiday. John Wall struggled tremendously to make jump shots off the pick an droll last year, and when you combine that with Wall's outstanding athleticism and Vucevic's slow lateral foot speed, Holiday absolutely needed to go under the pick there.

Vucevic shows on the pick and roll, but it's a half-hearted show, and Holiday is never able to get fully back into the play. 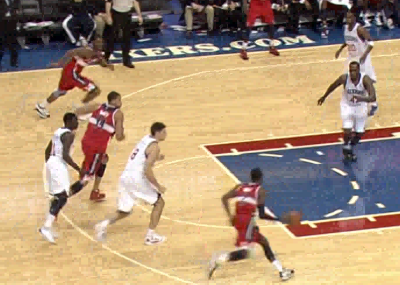 Vucevic obviously doesn't have a prayer of keeping up with Wall on the perimeter, and since he doesn't trap well enough to slow Wall down for Jrue to recover, Elton Brand has to rotate over to cut off Wall, who has a straight shot to the basket if Brand doesn't rotate over. The problem is, Vucevic isn't able to change direction fast enough to get back to his original man, and now with Brand having rotated over to stop Wall there's nobody left to defend Vucevic's original man, JaVale McGee. 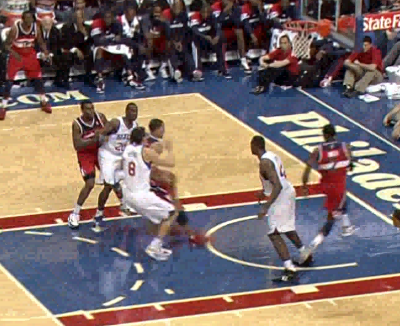 At this point, the only realistic options are to let McGee get the dunk, or to try to foul him, either by Jodie Meeks or Nikola Vucevic from behind. They do both, setting up an and-1.

Here's the video clip of that pick and roll sequence:

The second sequence happened only a few plays later in the second quarter, but it was interesting because Vucevic took a different approach to defend it. Whether he got deliberate instructions from the bench or whether he made the change on his own I'm not sure. What's discouraging is that the result is the same, he was beat.

The second pick and roll was with Wall and Ronny Turiaf, another Washington big man who is a threat to hard roll to the basket, but virtually no threat to shoot from the perimeter. 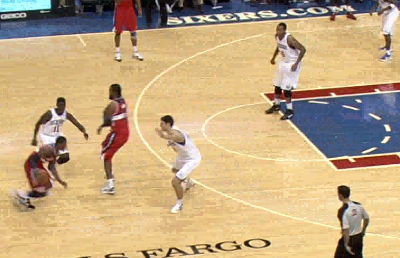 Jrue once again tries to go over the pick, putting Vucevic at a disadvantage from the get-go. Vucevic this time shows much harder than he did on the first pick and roll. 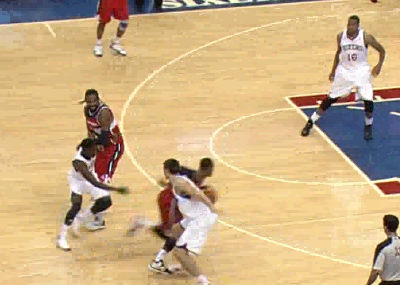 This time, seeing Vucevic jump out to trap the ball handler, knowing Holiday went over the screen, and knowing Vucevic doesn't change directions well enough to get in front of him, Wall splits the trap and is once again in the middle of the lane. This is as easy of a split as you'll see an offensive player have on a pick and roll. 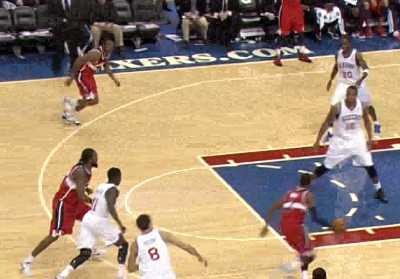 Marreese Speights now has to rotate over to stop the ball handler, which leaves Meeks out there on the perimeter having to cover two men. Now, if you recall this play you're probably saying "but this Sixers ended up getting a turnover out of this possession", and you'd be right. But the Sixers got this turnover more on Washington's mistake than on their own merit, as the Wizards had the Sixers beat. The mistake comes from Trevor Booker on the perimeter. Right now, if he stays outside straddling the three point line, Wall has an easy kickout pass. Meeks will then be forced to close out on Booker, and Booker will either be able to drive past Meeks if he closes out too aggressively or kick it over for an uncontested corner three. 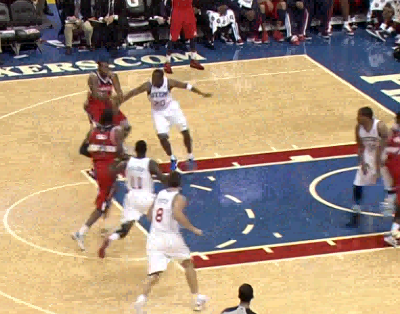 Instead Booker decides to dive towards the basket himself, creating a log jam in the painted area and runs himself right into the defenders, giving Meeks a chance to make a play on the ball before he's out on an island trying to defend two men.

Regardless of whether the Wizards made a largely unforced turnover that turned the play in the Sixers favor, the Sixers were soundly beat on both pick and roll possessions featuring Jrue Holiday and Nikola Vucevic on the defensive. Jrue didn't do the rookie any favors by going over the pick there, and defending the pick and roll has been Jrue's kryptonite on the defensive end so far in his young career. Regardless, the two plays show Vucevic's overall lack of foot speed and ability to change directions, and show the quandary Doug Collins is going to be in when asking Vucevic to play sizable minutes, and presents a problem that may be tough to correct even as Vucevic gains additional experience.