Share All sharing options for: Sixers Links: The Aftermath of Willie Green's Departure

If I were to tell you that you give up the most despised player on your team and a slow, doughy, upside-deficient big man for a near $5 million expiring contract and a first-round pick with potential on the cheap, is that something you might be interested in?  Yes, Bob, yes I would.

Now that we've had a day to celebrate the departure of Willie Green and heard the reaction from a not-so-enthused Hornets blogger, let's take a look the reaction from other other media outlets and also Doug Collins.  That's right my friends comrades fellow humans, it's time for links.

Get at me after the jumpidty-do-da.

Collins Talks About What Lies Ahead: Philadelphia Daily News

That's the type of person, and coach, the fans will see this season. Someone who is emotional and bound with relentless energy, a realist who is confident in knowing what it takes to turn around a team that lost 55 games last season and won only 12 times at home.

"We know that we have a long road ahead to be where we want to be," Collins said. "But our players have come back in great shape. Mo Speights had a wonderful summer, his weight is down and he's playing very, very well. Elton Brand weighed in at 252 pounds yesterday, which is great. Jrue Holiday has made a huge jump - I'm excited about that. Spencer Hawes is such a ball-friendly guy. Guys love playing with him the way he moves the ball."

"We have to team rebound. We're not a great shot-blocking team. Our system defensively is if you're not where you are supposed to be, you're going to stand out like a sore thumb."

Jordan posted this as a FanShot yesterday but I wanted to include it because it has some noteworthy qoutes.

"Evan got knocked back this summer, and I think it is the thing that happened to him," Collins explained. "I think it gave him an idea of how hard it is and how tough it is in this game and how nightly he is going to have a bull’s eye, and that guys are going to go at him. He is learning that you have to earn your stripes in this league"

"Right now [Turner] is much better as a facilitator then a guy with a scoring mentality," Collins continued. "One thing I talked to him about is that he is going to have to have a tremendous mid-range game as opposed to long perimeter jump shots – that is not his strength. I am teaching him to play with contact and use his body, and I have used [Blazers guard] Brandon Roy as an example."

"He is the total package," Collins said. "He is such a good kid and such a hard worker and he is pure. I honestly believe that next year you will talk about him being one of the top five point guards in the league. I think you will speak about him with Chris Paul, Deron Williams, Russell Westbrook and Derrick Rose."

Collins thinks there is a good chance that this team’s leading scorer will average only 16 points, but that seven players total could average double figures, those being Holiday, Iguodala, Williams, Young, Elton Brand, Marreese Speights and newcomer Spencer Hawes.

How to Break the News to Willie: CSN Philly

For Doug Collins, the hardest thing about trading Willie Green might have been telling him about it.

"Willie came in and worked out, and he brought his 10-year old son with him. I brought Willie out to the team and shared with them what I felt about Willie. And his little son was just crying and it hit me hard. It reminded me of when I got fired in Chicago with my kids. It was hard."

As much as a nuisance Willie was, telling him he's been traded right in front of his kid is rough.

The Collins Quest to End the Coaching Carousel: Yahoo! Sports

Collins is committed to slapping a dead bolt on Philadelphia’s revolving door that tosses out coaches just when they get settled on the bench. The former TNT announcer is the Sixers’ seventh—seventh!—coach since Larry Brown left in 2003. Collins hopes to bring stability and success to a franchise that has lost direction, attention and enthusiasm.

"We’ve got to show these fans we’re going to compete every night," Collins said. "But to get embraced, you’ve got to be embraceable."

The baseline seems to be somewhere between 23 and 30 games, how much improvement upon that do you expect, and since we're looking at it through the lens of WP and WS, who's going to make the leap, if you expect a significant improvement. 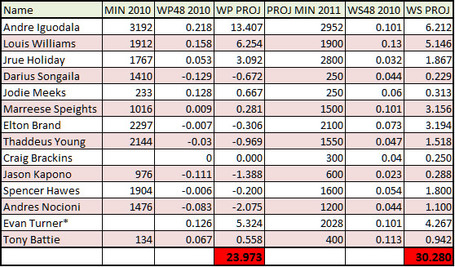 Completely Un-Sixer-Related News of the Day: Wizards to Go Back to Red, White, Blue Jerseys Next Season: Pro Basketball Talk

Count me in on supporting that change.  The gold/blue scheme they've been sporting since the name change just doesn't work for me.  And since all NBA uniforms are designed to please me, they are finally switching back to the colors they rocked as the Bullets.