Share All sharing options for: Sixers, Rest of NBA Get New Threads

While most of you are probably worried about issues like "Will the Sixers be a player in the Carmelo sweepstakes?", "Will the front-office ever have a plan to turn this franchise into a championship contender?", or "Can Jrue Holiday continue to build on his improvement we saw during the last two months of the season and summer league?", I'm concerned with more important matters like how these studs will look out on the court.

Yesterday morning (the 6th anniversary of the crash of Oceanic flight 815), Adidas and the NBA launched the new "Revolution 30" style jerseys that all 30 franchises will sport this season. The event took place in the palace of Seth Rosenthal or better known as the NBA Store in New York City. Dwight Howard, (Do What...) Toney Douglas (...Do), Wilson Chandler, Brook Lopez, and Jordan Farmar came out to help unveil the new digs (though I suspect it was for the free pigs-in-a-blanket and vast array of NBA logo socks).

Check out the fancy new uniforms after the jibbity-jump.

The reason for the change in styles has a whole big scientific-y explanation which is provided below the photo. What does Dwight Howard (an Adidas-sponsored athlete, keep in mind) think of them you ask? From NBA.com:

"The new uniforms are the most comfortable I've ever worn. When I'm on the court, I'm 100 percent focused on the game and I don't want to worry about getting too hot or uncomfortable. I'm a big guy but I play fast too, so feeling lighter on the court helps me do the things I do even better." 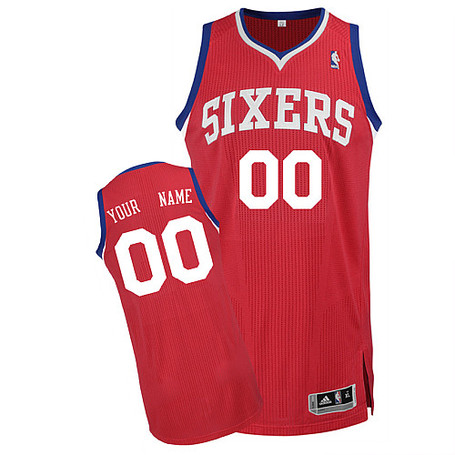 The advantages of the new "Revolution 30" style jerseys according to Adidas:

reduced uniform weight and increased player comfort by switching front and back numbers from heavier, dense materials to breathable mesh

Features Formotion technology which reduces seams, decreases friction between the garment and the players skin and optimizes the players natural movement through specially constructed material

Made from 60 percent recycled materials

The new uniform absorbs moisture in less than three seconds as a result of adidas CLIMACOOL fabrics which move heat and sweat away from the body through a combination of moisture management materials, ventilation channels, and three-dimensional garments, helping the uniform dry twice as fast.

Considered me signed up for anything that quickly absorbs sweat. There's really not much worse than showing off back, chest, and bum sweat to an entire national television audience.

One feature that isn't mentioned in the article that will be a huge benefit (for extremely personal preference reasons) is that teams such as the Bulls, Heat, and Nuggets will no longer look like they are playing in silk pajamas. I apologize if watching men play basketball in evening-wear is one of your fantasies. I'm looking at you yosoysean.

The new uniforms went on sale yesterday and are available at NBA.com. You can get customizable (aka get any player you want or a Derek Bodner) authentic ($250-$280) or swingman ($100-$110) away jerseys and both home/away Andre Iguodala swingman styles ($80) as of right now.

What do you turkey basters think of the "Revolution 30's"?

See more photos here and over at NBA.com.