This Day in 76ers History: Sixers Sign Elton Brand, but What if They Didn't?

Share All sharing options for: This Day in 76ers History: Sixers Sign Elton Brand, but What if They Didn't?

In honor of THE DECISION tonight, I figured we should take a look at the biggest (not best) free agent signing the Sixers made in decades. Let's take a trip down memory lane alllllllll the way back to two years ago. The date?

Ed Stefanski had supplanted Billy King as General Manager just 7 months earlier. The coach was Maurice Cheeks, and most of us didn't know who Tony DiLeo was. Josh Childress was poised to go to Greece and Brandon Jennings was still in high school. Liberty Ballers was naught but a twinkle in the teenage eye of a strange dude from Vegas who managed a Sixers blog called SixerSoul, which now looks like this.  I was working at a AAA retail store in Northeast Philly as the dude you get your maps and tour books from, not doing work, refreshing DepressedFan (which was still one third of a Yankees/Eagles site) like mad for more information on the deal.

With Baron Davis headed to the Clippers, it looked like a sure thing that Elton Brand would stay in LA. But his agent, David Falk, was a tricksy tricksy old man. Ed moved a future first (which ended up becoming Luke Babbitt at #15), the original incarnation of Rodney Carney, and Calvin Booth to the Timberwolves to create cap space to sign a big-time free agent. At the time, the only power forwards of note were Brand and Josh Smith. While people were clamoring for J-Smooth to team with Andre Iguodala and Thaddeus Young to form a freakishly athletic 2-3-4, it seemed the Hawks were poised to match any offer to the restricted free agent.  They did, of course, when Memphis low-balled him and Atlanta graciously matched, keeping Josh in the A-T-L.

Back to Brand. With the cap room available, Mike Dunleavy Sr. and Baron Davis were groping at strings trying to reel Elton back to the West. But Falk was already there. Stefanski had the paperwork and the Peekskill native was sharpeed in blood at the power forward position for your Philadelphia 76ers for the next 5 years at a cool $80 million.

A few months later, after Louis Williams and Andre Iguodala signed their extensions, Kelly Dwyer wrote this article, to which I scoffed at, pissed on, and kept in a dark alley in the back of my mind where I would hopefully never revisit it again. I agreed wholeheartedly with the EB signing at the time. I still do. I agreed even wholerheartedlier with the Iguodala signing at the time. I still do. Lou's contract was cheap enough that, even tough I didn't want him around, I was okay with it.

We needed a power forward. Desperately. So Ed went out and got the best one on the market, simple as that. Was it for too many years at too much money for a player almost 30 coming off a serious injury? Possibly. But the doctors gave him the go-ahead so I can't fault him for that. Was Elton Brand a different player before his 2007-08 knee injury? Or was it his dislocated shoulder that tipped the boat towards the bleak town of Old-and-tired-sville? As fans, we can't know. But we shouldn't flip off management for a deal that was the right move - the move that was supposed to make us contenders - from the beginning.

With Elton's three years remaining on the deal, the Sixers are still in salary cap hell. But let's just say, for pain and misery's sake, Elton stayed in Los Angeles, took a pay cut to play with Baron Davis, and we ended up with nothing in the summer of '08. Here's how the roster looked at the time. 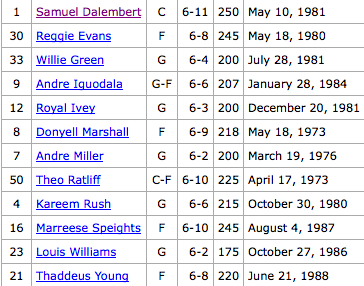 Odds are Reggie Evans would get the bulk of the starts in the frontcourt with Dalembert, leaving Lou, Andre, and Thad at the 1-2-3. That's what Cheeks/DiLeo did once Elton got hurt, so that's what I'm going with. I don't think it changes what happens that season, since Brand only played 29 games, and we got a steal in Jrue Holiday at 17 in the draft -- I say we keep it.

Going into this past season, we would have had Dalembert, Speights, and Jason Smith returning from injury as our only frontcourt guys, providing we make the same Evans-Kapono swap. With enough cap room to go after a max guy, here's a few big men who were more or less available in the 2009 Free Agent summer: Carlos Boozer (exercised player option), David Lee (signed one-year deal with NY), Lamar Odom (signed four-year deal with LA), Brandon Bass (four years with Orlando), and a slew of other tweeners or guys that had no shot to leave their respective teams. Bottom line: they would have been scraping at the bottom of the barrel.

While there's an overwhelming possibility that Stefanski would have overpaid for these guys, let's say he didn't. Let's say he held onto that precious cap space and mounted a full-out assault at the 2010 Free Agent crop. Obviously there's no telling what would've happened last season with the lineup as Jrue-Green-Iguodala-Thad-Sam in Jordan's system, but let's continue with the idea that we got the 2nd overall pick thanks to the wizardry of Tanner and Derek, and took Evan Turner.

Then it's options a-plenty. We could package the pick with Dalembert's contract for expirings to get LeBron/Bosh/Boozer/Gay/Lee/Amare/Johnson to come to Philadelphia and begin next season with a Jrue-Iguodala-LeBron-Bosh-Speights lineup, or something to that effect, offering a young, supremely talented (albeit defense deficient) roster heading into the 2010-11 season. Sip on some of that fruit punch as you're watching tonight's LeBronfest.

Granted, all of these moves are completely, totally, ludicrously made out of hindsight. The general public would have murdered the front office after two years of not going after a power forward, wallowing in futility with cap room to spare. And odds are Snider-Stefanski wouldn't have moved the proper chess pieces to set this up.

Just some fodder for this day, two years after the Sixers signed Elton Brand, where we all could have been doing what Knicks and Heat fans are doing all over the country: violently throwing up and refusing to speak with anyone, of course.  Sounds like a dream.