Share All sharing options for: Roster Roundup: The Sixers Meet The Bluths

But since it's the offseason, where both dreams and farts are ignited and immediately extinguished, I'll humor myself without use of lubricant and dig in.

"I don't know why you're not taking this 'I'm out of here' seriously because I am out of here. Seriously."

Andre shoulders an awful lot of blame for the Sixers' failures and despite some poor body language and shot selection, it doesn't stop him from doing his job. Michael's just trying to be "a good guy" and do what's best for the family. Andre driving the staircar would be a sight. As would Jason Bateman making the Andre face.

Substantially and exhaustingly more after the jump. Warning: If you haven't watched the show, watch it, then read this. Here's Tanner's LOST post from a few months back. Another one of these may pop up in the future, be warned.

(All images are screenshots pulled from Hulu.com and are property of FOX and/or Mitchell Hurwitz's gorgeous brain)

He's Mister Manager with some occasional awkwardness but the best intentions. Tell me you don't see this. 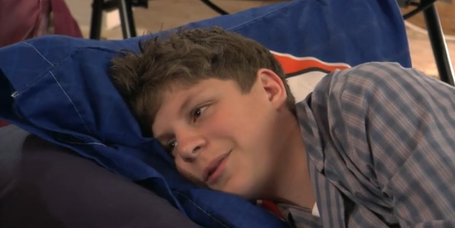 Okay, yes, this means Evan is incestuously in love with Jrue, who is, in fact, a woman. But can you blame him? Jrue's got just enough bad boy in him to be the bad girl. I could see Jrue conning his way into a gig as studio executive just as well as I could see Maeby running the point and establishing herself as a cornerstone of this franchise for years to come. Not quite Ty Lawson though. (That joke was just for me)

He's handcuffed this franchise/family in more ways than one, and while there's only a slight chance Elton has been linked to business dealings with Saddam Hussein, he and his agent David Falk (Wayne Jarvis) are not exactly Catholic schoolgirls (although they might be) -- just ask Mike Dunleavy. Brand serves as Andre's mentor, having not been the perfect father or role model. He uses scare tactics, like the past few seasons mired in injury, to frighten his children into behaving as he wants them to. Elton is also a Jewish preacher and has faked his death in Mexico.

Spencer Hawes and Elton Brand are married and he's given birth to Andre Iguodala. Get your giggles out now. He's also the mastermind behind it all, so  could that portend good things to come? I don't see any way that it could.

Never really sure what you think of Oscar because he can only stay so long before everybody gets sick of him, Speights' offensive black hole tendencies ring a bell. Especially with last year's squabbles between Elton Brand (George, his twin brother), Mo seems a perfect fit for the pothead lost uncle of the Bluth family.

"Illusion, Michael. A tricks is something a whore does for money."

How else could his roster spot be explained? Willie's a segway-riding magician and that's that.

If anyone's a nevernude, it's the Jodiac Killer. He's also slated to be the world's first analrapist.

"Did you enjoy your meal, Mom? You drank it fast enough."

Lou has protested circumcisions, animal research, gay marriage, and not starting at point over his daughter, Maeby. The sex life of Lou and Jodie is something I will ponder for an exceedingly long time.

Since both Thad and Buster are missing one of their hands, this is the perfect fit.  Andre has to remind Thad not to massage him during the game and Mo Speights is actually his father. This is all factual.

I get the impression Andres doesn't speak much, and when he does, he repeats the same thing over and over. He's also Willie Green's son and the high school crush of Jrue Holiday.

Not entirely sure he speaks English, and he's probably not on the team. Hel-loh. Plus, he looks like Fro-Zone. Annyong!

Of course Jason Kapono would produce Girls with Low Self-Esteem.

Get off my team, Franklin.

My apologies if you haven't seen the show or read through this awful waste of time.

"I've made a huge mistake."