After asking my boss for a long lunch break, I headed out of my office in Times Square only two blocks southwest to the Westin with a childlike grin on my face. Nervous and not knowing what to expect, I called my recent best friend and Hebraic brethren Seth Rosenthal from Posting and Toasting and Roasting to see where he was at. After a few nudity-related texts to find out what he looked like ("Fly-ass khakis, blue shoes"), I headed for the elevator when a 6'7 well-dressed black man with glasses walked in front of me. Jelly-legged, I changed my pants for the first time -- and that was when the bullet points started.

On playing in Philadelphia:

I haven't heard anything negative. Coach Collins just says as long as you play tough, you're a competitor, and you play with passion, there should be no reason you wouldn't love to play in Philadelphia.

Smallwood: Are you an NBA 2-guard?

Best advice given to you:

Be myself, enjoy myself and don't get into money because money is the root of all evil.

My first question - Any lingering effects from the back injury?

No I'm fine, feel like a million bucks haha

Me again - Have you been tweaking your jump shot to get ready for the added distance?

He's so passionate about the game. If I get an opportunity to play for him, I'd be really excited. He's a really cool guy who knows a lot about the game and if I get picked, I can't wait to pick his brain.

About the Wizards picking John Wall over him:

Me - Has Collins told you what kind of team you're going to be?

He's told me a little bit but I can't really tell you all that. Haha

I definitely think Philly is the best fit.

He also said he plans on improving his three-point shooting to about 40% (!), tightening his handle, and taking smaller defenders into the post to get them into foul trouble.

Let's just say I am completely, 100%, no-doubt-about-it-get-this-kid-in-uniform-now sold on Evan Turner. I will be as melancholy as melancholy gets if we don't take him. You won't like me when I'm melancholy....

I got a chance to speak with 12 of the 14 green room invites; everybody but Gordon Hayward and some dude named John Wall. The "Wall" of people was too impenetrable so I decided to get some more Paul George. The rest of my Media Day shenanigans will be documented at Ridiculous Upside, but here's a few bullet points to wet your pallet before I post that tomorrow morning. 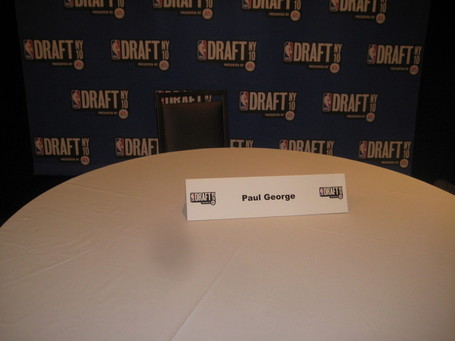 It was truly a Draft Fanboy's dream. A kind of coolness that can only be topped by the NBA Draft the following night. Here's to hoping. More to come, folks. Another thanks to SB Nation for giving me the opportunity (can't say that enough).