via Elizabeth Trubey of ASI, representing Marreese Speights. If you're ages 8-14 (just missed it prideoux), go get some lessons from Mo. Just don't expect much time to be spent on passing (I had to).

Philadelphia 76ers center-forward Marreese Speights and Houston Rockets guard Kyle Lowry are working together these days. Speights and Lowry will team up to host a youth basketball clinic on June 26, 2010 at The Shipley School in Bryn Mawr, Pa.

The clinic, organized by 24-7hoops.com, welcomes youth and teens between the ages of eight and 14. For a cost of $75, lunch and athletic apparel will be provided to all participants.  During the clinic, attendees will enjoy spending time with Speights and Lowry, while learning basketball techniques, shooting skills and exercise drills.

Activities include workouts with boxing glove shooting skills coach Roger Galo, who has pioneered The AIM METHOD. This program, featuring shooting methods while wearing boxing gloves, teaches a streamlined approach to shooting that is centered on players’ bodies, coordinating with a visual target.

Speights and Lowry will be joined by NBA players and various international league players, as well as current and former D-1 players from around the Philadelphia area.

"I’m excited to get out there and work with the kids on their game," Speights said, adding, "I remember how much I learned from summer clinics; I’m just happy to be able to help these kids learn the way that I did."

Lowry agreed, stating that the clinic is "a great opportunity to give back to young fans that aspire to be better basketball players."

Good stuff, hopefully he's using this as a stepping stone towards getting in better shape. Pretty please. I'm also interested to see who the other players are that'll be attending. I'm betting Dionte shows up, hopefully sans weaponry. 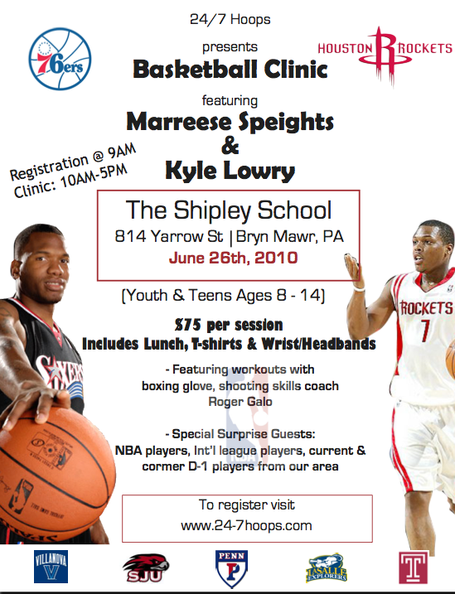