A Night at the Lottery: An Epic Journey to #2

Share All sharing options for: A Night at the Lottery: An Epic Journey to #2

About one month ago, Jordan sent me an e-mail about the possibility of getting credentialed for the 2010 NBA Draft Lottery.  I immediately went on this new invention called "the internet" to see if I had any exams conflicting with the opportunity (our finals week is very late).  My last final was the morning of May 18, the same date as the lottery.  It was destiny (insert LOST reference here).  I could take the exam in the morning and leave straight for the capital of the United States of America; Secaucus, New Jersey.

I promptly told Jordan I would gladly be a part of this if it could get done.  Low and behold, the NBA credentialed both Derek and me for the evening's events.  Continue after the jump for an in-depth analysis of the heart-wrenching drama occurring.  You think you know, but you have no idea.  This is the diary of Ja Rule Tanner's lottery experience.

450: the address of the building.  That was my destination.  That was my goal.  That's also how much I bench (false).  Walking in the door of the NBAE studios, I had the elation comparable to that of a youngster going to see the mall Santa Claus for the first time or Mike going to his first (out of seven) Backstreet Boys concert.  This was uncharted territory for me.  Never have I been to an NBA or any major event as a credentialed media member.  I had no idea how majestic it could really be. 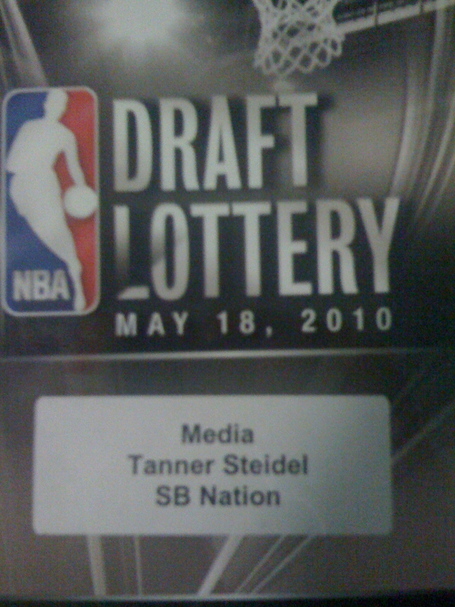 I picked up my credentials and was hereby ready to single-handedly land the Sixers a top 3 pick (I take all credit).  There was one thing missing, however.  Derek the body wasn't there yet!  The lobby seemed like an excellent place to wait for him (and scope out some of the ravishing public relations ladies).  All of a sudden, the stars started showing up.  First Danny Granger came walking by in a white tee, shorts, and my personal favorite, sandals with socks.  Moments later, Tyreke Evans had to steal Granger's thunder showing up looking dapper as all hell in a gorgeous suit worthy of James Bond (if JB wore purple ties, which I'm all about).

I got a call from Derek telling me he was parking and about to be on his way into the building and then before I knew it, I was standing five feet away from Commissioner David Stern.  Have I name dropped enough for you yet?  If yes, stop reading now because there's plenty more where that came from.  A simple "Good evening Mr. Commissioner" from your's truly was followed by an acknowledgement head nod and smile from the league's headmaster (you happy Mike?).

While continuing my wait for Derek (I assure you it was not as long as I'm making it seem - this all happened within 5 minutes), 6 security guards came walking towards me.  Clearly they weren't there to detail me, although I think I deserved it.  If David Stern had no security guards around, I knew this guy would be important.  This paramount someone, Mikhail Prokherov (or as Commissioner Stern said, Mike).  I'm usually not in complete awe of people when near them; this, however, was an exception to the rule.  His presence was there, and boy did I feel it.

The biggest celebrity of all came in next; Derek "The Body" Bodner!  We walked through the hallway, hand in hand (or not), to the media/hospitality tent.  We set up shop at one of the computer tables and got ready for the night's events.  Let this be know right now, Derek is a media event champion.  Voice recorder? Check.  Headphones to listen to recordings?  Double Check.  USB cable to transport recording to computer and convert to mp3?  Triple Check.  Without Derek, I am just a lowly peasant (a sexy peasant, but still a peasant). 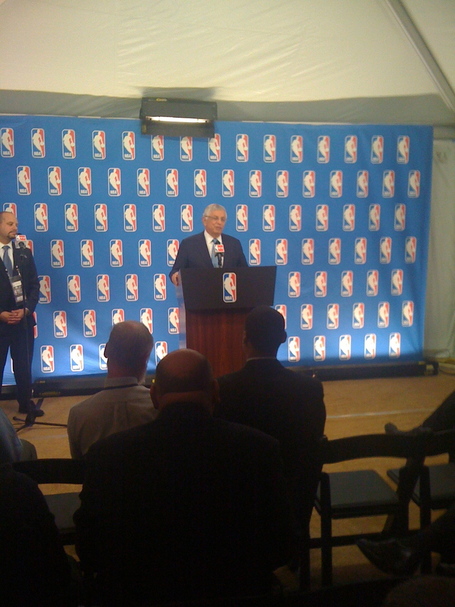 6:30 PM rolled around and it was time for Commissioner Stern's press conference.  Highlight from this one?  A reporter asked Stern if he would regulate recruiting of free agents this summer because the names are so high caliber.  Stern pretty much made a mockery of the question by saying he didn't care if the governor of said town wrote/sang a song about a player to try and get him to a city; for as long as it's after July 1, teams are free to do whatever.  For more on Stern's presser check out the article Derek did for SB Nation's home page.

Now the 6th spot.  I'm expecting to hear Philadelphia 76ers.  I put my head down and heard "the Golden State Warriors."  I hopped up out of my seat ecstatically.  Tom Moore looks back at me with a huge smile on his face and pumps his fist in enjoyment along with me (I would have danced, but I didn't want to get kicked out or anything).  We got top 3.  Mission WTF was a success.

Actual Texts Sent and Received at this time:

Tanner to Mike: We got top 3!  They just took a commercial break.

Mike to Tanner: Ahhhahahhhhh - I love you no matter what. 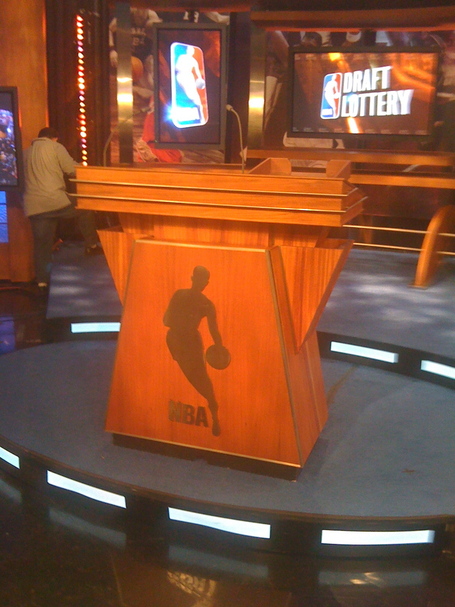 Commercial break.  Jrue Holiday on center stage.  Could we really have done the impossible and landed the 1st overall pick?  Pick number 3 goes to...... the New Jersey Nets.  Holy monkey!  Is this really happening?  Is this real life?  The second selection goes to... the Philadelphia 76ers (Jrue Holiday gets huge smile on his face).  Not number 1 but yes! Oh yes!  The Sixers actually just received the 2nd overall pick in this year's draft.  I was stunned.  Oh yea the Wizards got 1st but who cares (John Wall does, but not in a good way).

I immediately raced towards the studio entrance to shoot the breeze with Jrue Holiday and Ed Stefanski.  A little insider information here; Ed Stefanski had the demeanor of a giddy little child the entire time he was speaking to the press.  It was as if the pain and suffering that the organization has gone through was wiped clean. Tabula rosa, folks. The smile never vacated his face.  Let's hope it's not because he knows he can get a wily veteran for that 2nd pick.  For Ed Stefanski quotes and reaction, check out Derek's two posts from earlier today.

"He's very tall, athletic, but could really work on his jump shot. But he's a wing player, somebody who gets out there and locks up on defense and can handle the ball.  I think he's a perfect fit."

"We can move Andre to the 3 and add a lot more ability to score."

Will it be Evan Turner, Derrick Favors, or DeMarcus Cousins?

"I could see either.  I think the front office likes our big man situation right now.  I think a wing would be ideal for us and move Andre to the 3.  I'm kind of leaning towards Evan Turner."

Reaction on when Sixers did not get 6th pick

"I was (surprised).  I didn't get really nervous until they didn't call the 76ers and then I was like 'woah.'  It kind of shocked me.  Up here I was nervous, kind of anxious, and then we came up with the second pick."

Was he nervous about possibly getting the first pick?  Could he have played with John Wall?

"I've seen him play, I know him, and I could play with him.  He's a great player and someone I saw myself playing along side of." 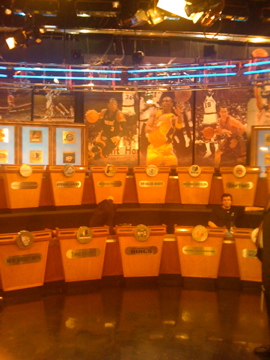 After talking to the rest of the media, Jrue had something on his mind that he really needed to get off his chest (okay maybe not) regarding his favorite Sixers blog on the internet.  With permission from Mike Preston, video evidence was obtained and we at Liberty Ballers have exclusive footage.  Check it out, check it out boyeeeeeeee.

The events had ended.  The 76ers got the second pick for the draft.  We got our choice, yes choice, of Evan Turner, Derrick Favors, DeMarcus Cousins, or Paul George.  It was only 48 hours ago that we thought the choice would be Cole Aldrich, Ekpe Udoh, or Xavier Henry (I picked three random names).  I knew my first trip to an NBA event as a media member would be memorable, but not like this.  This is Stringer Bell getting capped memorable.  This is Dave Chappelle stand-up memorable.  Never in my dreams had I thought Evan Turner would be a possibility.  If ownership was searching for a way to get the fans interested again, look no further, for you just landed the opportunity to select an all-star caliber player for years to come.  Please, just please, don't mess it up. 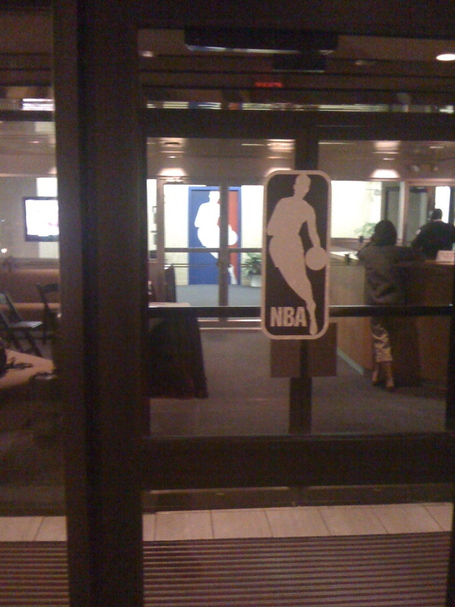 One of the greatest experiences of my life (which isn't that interesting so it's 1 by default) concluded.  I was given an unbelievable opportunity that was impossible to pass up.  Thanks got out to Jordan and the SB Nation crew for hooking Derek and me up with this exquisite moment of glory.  Evan Turner is on our radar.  Bask in it for all it's worth.  Take a bubble bath and just keep reiterating "We got #2" over and over again.  It doesn't get old (I know from experience - I also had 3 rubber duckies) unless your skin starts to get wrinkly because you've been in for too long.

And close the book on that one.  Get the key and lock it.  My diary of the 2010 NBA Draft Lottery has written its last page.  And with the closure of one story begins a new one.  Coming soon to a theater near you (at least I hope): "A Turner Classic: The 2010-2011 Philadelphia 76ers" starring the one and only Evan Turner.