Day 12 of our draft lottery experiment after the jump. Will the "Rule of Aminu" continue? Will John Wall grace us with his presence? Will John complain about "the jump" not being used enough? Will TAFKA now be referred to as Benedict Bourn 'round these parts? Find out after the jump!

This is American Idol! 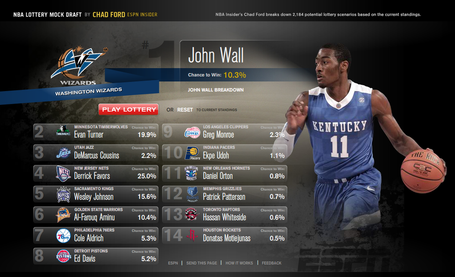 7th pick and Cole Aldrich? The Worldwide Leader has updated its lottery system I see, and the Sixers got screwed. Cole Aldrich is my worst case scenario. I didn't go through an entire season rooting for losses so I could watch Cole Aldrich in a Sixers uniform -- not when there's way more potential on the board. When it comes to Aldrich, just say no.

According to DX's rankings, these are the guys who'd be available to the Sixers at 6: Aldirch, Davis, Johnson, Udoh, and Patterson. Wesley Johnson, please.