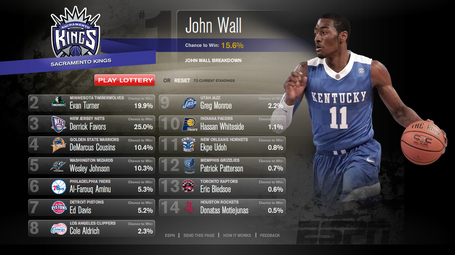 6th pick and Acid Aminu again. Well, we know what it's like to get the 6th or 7th pick, and it feels terrible. 10 simulations into our experiment we've gotten sixth or seventh 80 percent of the time and 1-3 20 percent. The real downer is, we've actually gotten a top 3 pick more than we're supposed to (18.25%). But there's only one draft lottery, and if we got the sixth or seventh pick 99 times out of a 100, that still leaves ... ONE TIME! (Sorry for using the same clip Tanner used a while ago; it's just so inspirational!)

According to DX's rankings, these are the guys who'd be available to the Sixers at 6: Aldirch, Davis, Johnson, Udoh, and Patterson. Wesley Johnson, please.