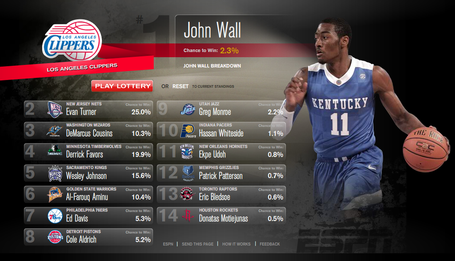 7th pick and Ed Davis! Shocker! In 9 simulations, we've gotten the 7th pick most often (4 times). This is terrible, especially if the top 6 shakes out like this simulation. I love me some Ed Davis, but I'm going with Hassan Whiteside in this scenario. I want the most upside -- especially defensively -- and he's got it. Davis and Udoh would finish tied for a close second.

According to DX's rankings, these are the guys who'd be available to the Sixers at 7: Davis, Johnson, Udoh, and Patterson. Wesley Johnson, no-brainer.