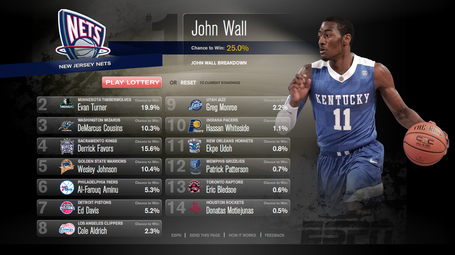 6th pick and Acid Aminu for the 6th time. By now, we know this situation like nobody's business. We've actually over-achieved during the first 8 simulations. We've gotten a top 3 pick 25% time -- 7 percent higher than our odds -- but still no John Wall. It really is amazing how our fate comes down to a 10-minute period. If the Sixers get "skipped" I will be doing backflips through Ryan Howard's basement. If their name gets called at pick 6 or 7 (81.75% chance) I'll be devastated. What kind of superstitions do you plan on busting out on lottery night, if any?

According to DX's rankings, these are the guys who'd be available to the Sixers at 6: Aldrich, Davis, Johnson, Udoh, and Patterson. Wesley Johnson, no-brainer.