Share All sharing options for: OperationWTF - Day 7: Trade down? 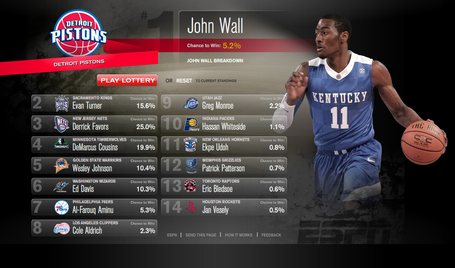 7th pick and Acid Aminu AGAIN! 5 out of 7 times the Sixers have gotten Aminu. Here's a thought: say the Sixers pick 6th or 7th and WTF, Cousins, and Johnson are gone -- which they probably will be -- would you be interested in moving down 3 or 4 spots and picking up a future first-rounder? I'd strongly consider it. Say they pick 7, and the best available are Davis, Aldrich, Monroe, Whiteside and Udoh. I don't see much of a difference in those 5 guys (except Monroe, I hate Monroe), so why not trade down to 11, pick Udoh, and end up with 2 first-rounders next year?

Another potential scenario: Would you package the number 7 pick and Elton Brand for an expiring contract, and maybe a late-first, early-second round pick? It'd be intriguing as heck, but I don't think I'd do it. I'd rather just wait Elton's contract out.

According to DX's rankings, these are the guys who'd be available to the Sixers at 7: Davis, Johnson, Udoh, and Patterson. Wesley Johnson, no-brainer.