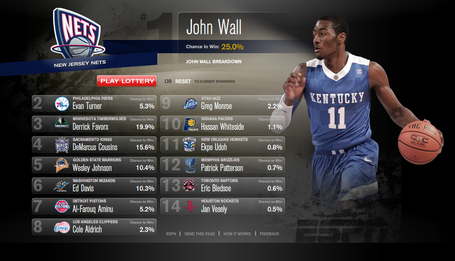 2nd pick and Evan Turner. Now this is where it gets interesting. Evan Turner's the sure-fire number two right? I'd strongly consider taking Favors here. I think he fits better, and I think he has more potential. However; things change if the plan is to get rid of Iguodala. If the Sixers plan on unloading Andre, I think Turner's the pick.

What if Minnesota or Utah got number one in this scenario? Would either team pass on Wall for Turner, Favors, or even Cousins? John Wall falling to us at number two would almost be as cool as us taking him number one.

Might the Sixers even consider Cousins here? I hope not, but there's a lot of things to think about in this scenario. It's a tough decision I'd love to see the Sixers get the opportunity to make!

According to DX's rankings, these are the guys who'd be available to the Sixers at 2: Turner, Favors, Cousins, Wesley Johnson ... the same guys available on ESPN.