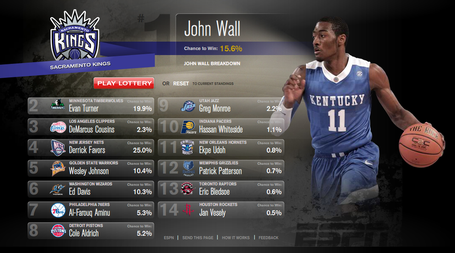 7th pick and Al-Farouq Aminu again. Five days in and four times the Sixers have selected Acid Aminu. However; the more I think about it, the more I think Aminu will go top 6, maybe top 5. The drop from 6 to 7 hasn't hurt us in these lottery simulations, but I think a similar drop in real life will be costly. I can comfortably say that I've settled on WTF, Johnson, Aminu as my top 6. After them it gets a little dicey. I was orginally high on Davis -- still am -- but I can't justify having him in my top 6 anymore, I just can't. Assuming the Sixers fall to 7, and my personal top 6 are off the board, the decision would be between Davis, Aldrich, Whiteside, and Udoh. What do you guys think? I'll save my thoughts for the LB Big Board II. We can only hope that this isn't a decision Tony DiLeo and the Sixers will have to make on draft night.

According to DX's rankings, these are the guys who'd be available to the Sixers at 7: Davis, Wes-Jo, Vesely, and Udoh. Wes-Jo, no doubt.

(In a stunning development, the Kings have gotten the number one pick 3 of our 5 simulations. Rejoice Sacramento, rejoice!)