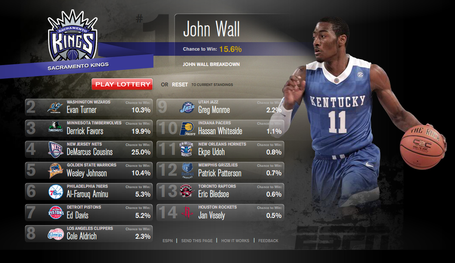 6th pick and Al-Farouq Aminu again. It took us four days to get our first repeated scenario, and still no top 2 pick. I said it before, but I'll say it again -- Aminu is my pick here unless Wesley Johnson, DeMarcus Cousins, or D-Favors fall. One thing's for sure, if the Sixers draft Aminu, he needs a nickname. I thought I read somewhere that people called him "Acid". If that's the case, I'm all aboard. And even if it's not the case, I'd like to make it the case.

"With the 6th pick in the NBA Draft, the Philadelphia 76ers select Acid." 'Nuff said.

According to DX's rankings, these are the guys who'd be available to the Sixers at 6: Aldrich, Davis, Wes-Jo, Vesely, and Udoh. Wes-Jo, no doubt.