Who to Send to the Draft Lottery: Lists are Fun

Share All sharing options for: Who to Send to the Draft Lottery: Lists are Fun

Now that the season is over, it's time to kick it into a higher gear and get down to more pressing matters.  As suggested by Jordan DaShonte Sams, I will undertake the difficult task of predicting who the Philadelphia 76ers will send to the NBA Draft Lottery on the 19th of May.  If you love America, please hit the jump for the five candidates (in climactic descending order, of course) to stand there looking smugly smug when the number one pick is ours.

5. Derrick Coleman - Much has been made of the bankruptcy of the former first overall pick, but I say that's hogwash.  DC has millions, nay, billions in fur coats and scalp shine.  I imagine the Syracuse alum would show up to Lotto night wearing all of his coats (a la Joey with Chandler's clothes) and auction them off on QVC later that night.  He would also use his fat ass to create underneath.  Plus, in light of the recent Larry Brown rumorage (it rhymes with hemorrhage for a reason people), DC stands to earn a roster spot in his third run with the Sixers.  I have a bit of a twist on the Brown-Coleman marriage.  This time around, Coleman and his 12,884 career points will don the coach's cap and Larry heads back on court to serve as point guard over Jrue Holiday, who hasn't had a career of success under his punk belt.  And in this business, it's all about what have you done for me twenty years ago, thus making Coleman-Brown a great pick to represent the red, white, n' blue at the lottery. 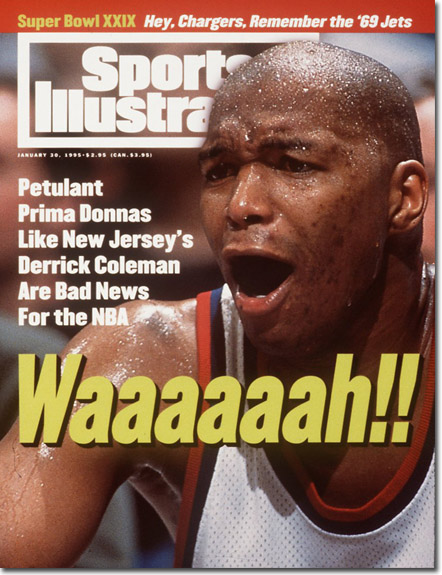 4. Eddie Jordan - I know, I know. He just got fired. But hear me out now. Who has done a better job at winning when he's supposed to lose this season than good ol' EJ.  All we need to do is tell him he's getting ready to coach an actual game that we must lose and he'll perform some Willie Green magic and POOF, there's John Wall as a Sixer.  Plus, if we lose the lottery, it's only because "the other team hit shots." We may run into some legal issues similar to the Zydrunas llgauskas return to the Cavaliers. Also, there's countless other teams that would want Eddie to defend their team's honor so it would cost a buttload to have him there.  I think he's worth every penny, but his desirability may make him a hard sign.  Eddie doesn't get a picture.

3. Jaime Maggio - Oh yes. Despite a torn ACL, Jaime has the best lateral quickness on the Sixers broadcast team.  She also has the second best legs.  According to my percentages (not provided by Synergy Sports) that makes her the prettiest candidate to go to the lottery and make some noise for a top 3 pick.  She would also own Dei Lynam in every imaginable contest except for the max bench press 'cause Dei works her pecs on the reg.  She also gets great interviews out of Jrue Holiday's Momma, who revealed that Jrue is "a sweet boy." What better way to kick off the Draft festivities than with Jaime holding the Sixers card showing those pearly whites? I can think of one. 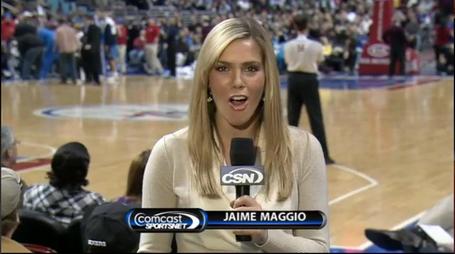 2. Allen Iverson - While he certainly performed at an MVP level during his 25 games here this season, he could be (dare I say it?) even more important to the future of this team as Lotto Representative.  Riding his recent pub from his ESPN 30 for 30 documentary, the Answer could vault himself to the top of the media heap by getting one of WTF for Philly. (Pick your favorite cliche here) "How poetic would it be if..." "Hollywood couldn't script a story like..." "As if fate itself has intervened on the fortunes of..." Allen Iverson being the Poster Boy (that's also my former wrestling name) for John Wall becoming his successor as superstar in the City of Ambiguous Love.  Bubba Chuck look real good in front of cameras. 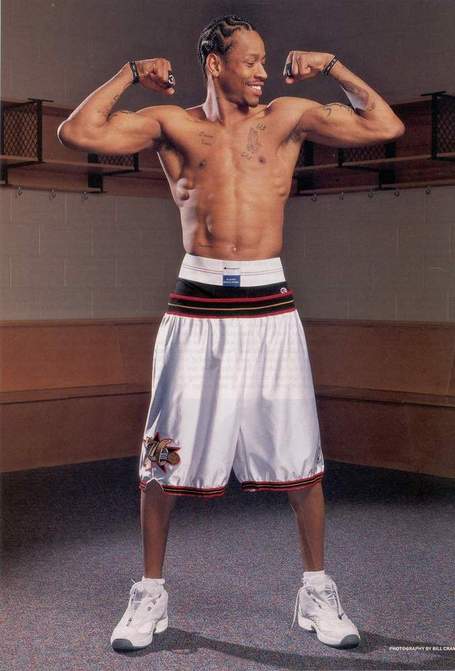 1. Justin Bieber - THE ULTIMATE UPSET! The Biebster is the perfect candidate for practically everything, but especially winning the lottery for your Philadelphia 76ers. He would charm the pants off all the ball-pickers and give the Sixers some much-needed attention around the pre-teen girl demographic that we've been missing since Kyle Korver left.  Once he did win us the lottery, John Wall would then be known as John "Baby" Wall and he'd have to grow his hair out.  There would be a conundrum, however, when J-Bieb's play demands for a starting role and Baby Wall can't compete, so we'd trade Wall for Demi Lovato straight up to add a little Fleetwood Mac drama to the team. I vote yes to Bieber. 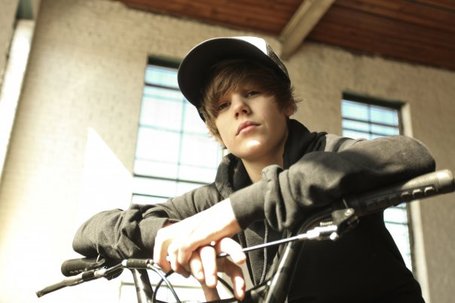 So that settles it.  Post your futile counter-arguments in the comments, but you know I'm right. You also know you're my one love, my one heart, my one life for sure.  Until May 19th, send your pleas to Justin Bieber (123 Bieber Place, Bieberville, BI. 24327) to save our franchise.