Round 2 of the greatest tournament on the planet came to a flourish Sunday evening with many surprises, heartbreaking moments, and a sense of triumph all across the board.  Never have I experienced a wider range of emotion in such a short amount of time (6 seconds).  One second it's euphoria, the other it's a feeling of emptiness and a sense that you just need a good hug.  All of this over a sport that truly has no bearing on my actual life.  Speaking of this "life" thing that everybody keeps talking about, I think I need to get me one.  But right now the one I got is providing the interwebs links and fantasy, made-up competitions that we as playaz have no control over.

As you can see from my self-made table, we have a three-way (hey now!) tie for that number one spot between The Body, E-Weavs, and T-dubs.  Sorry Body, but it doesn't look like you will hold that position for too long.

Half of the competition still has a shot at getting the national champion right and all of you who picked Kansas are kicking yourself in the jayhawk (I'm looking at you Bourn, Sams, North Dakota, Cornell Dartmouth, and 16Ben).

Still a long ways to go and it really is anybody's championship to take (well, except for Ed Rowe - sorry man but you are in terrible shape).  Best of luck the rest of the way. 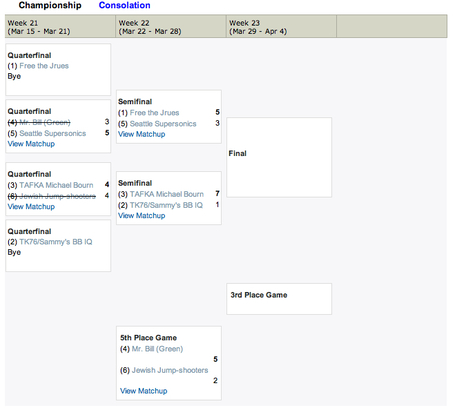 Now there's the matter of the competition that's been a full season in the making.  The fantasy basketball league of extraordinary gentlemen.  We have reached the semifinals and it's time to get down to bid-nezz.  Mike Bourn somehow came away with the victory last night despite the Jewish-Jump-Shooters being listed as the victor yesterday (I suspect cheating on a worldwide scale).  He's got a tough task as he's taking on a Dr. TK who can prescribe himself a victory.

The Jrues take their 21.5 game margin into the playoffs as the one seed (gloatgloatgloat) and hope to pounce all over the Sonics.  I'm not exactly sure whose team that is so I can't talk too much trash.  Boo.

Take it all in folks.  The champions will be crowned soon.  And when they are, I expect some excellent victory speeches with plenty of trash-talk and personal attacks.  And if you ain't down with the Liberty Ballers fantasy games, I got two words for ya...