As Sixers fans, we've spent the season complaining about Eddie Jordan.  From the time he decided to implement the Princeton offense on a roster that obviously wasn't a fit, it has been obvious that the Eddie Jordan hire was wrong.

Since it's beginning to look more and more like the firing of Eddie Jordan is a matter of when, not if, I decided to take a look back at all the coaching changes in 76ers history with the goal of determining whether this was the most unsuccessful coaching change in franchise history.  A few quick notes, then after the jump we'll take a look at the chart of coaching changes, and discuss some of the epically bad hirings.

Continue reading for a breakdown of past coaching changes, and discussion on whether this is the worst in franchise history. 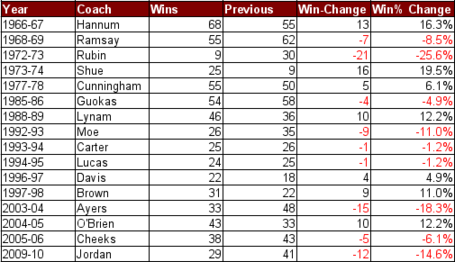 The granddaddy of epically bad seasons, this is the record for futility teams try desperately to avoid.  As you see the 7-57 New Jersey Nets play their hearts out over the final 18 games of the regular season, this is a big reason why.

Roy Rubin took a team in disarray.  Wilt Chamberlain was traded a few seasons earlier, and upon Rubin's hiring Billy Cunningham bolted for the ABA.  All that was left of the NBA Championship team was a 36 year old Hal Greer and a bunch of journeymen led by recently acquired Fred Carter (who, ironically, would later go on to replace Doug Moe behind the bench in the 26-56 '92-'93 campaign).

Even with all the personnel changes, a 21 win drop -- while setting a record in futility -- is hard to beat.

Doug Moe and Fred Carter.  No other names go so hand-in-hand with Sixers ineptitude.

This was, however, another season doomed to failure.  The trade of disgruntled superstar Charles Barkley left an already mediocre team bereft of talent, and ushered in an era without hope, an era not ended until Allen Iverson -- and, perhaps more importantly, Larry Brown -- ushered in a new era of Sixers basketball.

Doug Moe had collected a career 609 wins before heading to the Sixers, including winning the coach of the year award in 1988 when his Nuggets went 54-28.

The coaching job was horrible, matched only by the talent on the roster.

Larry Brown is a tough act to follow, especially when he tinkers with his roster at the end of a run to try to make one last, desperate, doomed run.

After winning 48 games and losing to the Pistons in the Eastern Conference Semifinals, Brown bolted for the Pistons -- set to appear in consecutive NBA Finals -- leaving Randy Ayers to try to win with the mess of a lineup Brown left him.  And win he did not.

After a dismal playoffs, Larry Brown moved whipping boy Keith Van Horn for Glenn Robinson.  The "Big Dog" was just coming off a 20 point per game season, and allowed Kenny Thomas to move back to his natural power forward position.  The move, and the season, was an epic failure.  After one injury riddled, mediocre season with the Sixers Robinson was benched for Andre Iguodala, and he suited up an entire 42 games during his Sixers career.

As for Randy Ayers?  He was fired 52 games into his only season.

Expecting the squad to match the success Larry Brown was able to squeeze out of them was unrealistic, and the trade of Keith Van Horn was a colossal failure, but a 15 win drop?

This brings us to the present.  I'm not going to go into detail about Eddie Jordan's coaching job because, frankly, it's been beaten to death.  Covered ad nauseam here, by myself elsewhere, and all over the mainstream media, to the point where it pains me to dissect any further.

The team was in a rare spot, having to make a coaching change after a .500 season that saw them in a playoff, when interim coach Tony DiLeo unexpectedly turned around the Sixers fortunes last year.  Because of the expected "mediocrity" of the ballclub going into the season, the projected 12 win decrease is amongst the worst in franchise history.

It's hard to argue with a historically bad season as the 1972-1973 season was, even if the team was a dismal 30-52 the previous season and lost its best player.  The same argument could be used 1992-1993, which also had an already bad team losing its franchise player.  With very little roster turnover this year (loss of Andre Miller, regaining Elton Brand for a full season), this season ranks right up there with the worst coaching changes in franchise history.

So, there you have it.  What's been the worst coaching change in franchise history?  Can this team at least win that?