Sports Illustrated's NBA Preview edition will hit stands this week, and lead NBA writer Ian Thomsen has the Sixers finishing 2nd in the Atlantic and 9th in the Eastern Conference.

From the "enemy lines" section, which is the view from a rival scout:

"Evan Turner will fit perfectly into the culture that Collins will be promoting. Turner wasn't the most dynamic player in the draft, but he might have been the most polished. He can not only handle the ball but also play some point.  That could allow Lou Williams or Jrue Holiday to play off the ball and be a scorer, which is a more natural role."

He would also say:

"The two most important positions are point guard and center, and those are their weaknesses."

More about Holiday from the scout:

"Should their point guard be Holiday or Williams?  It's hard for Williams to play a lot of minutes at two guard because he's only 6'1".  The best thing would be to have Holiday emerge as their starter and then bring Williams off the bench as a combo guard and scorer."

The scout doesn't seem as high on Holiday's immediate impact as Doug Collins.

The preview should be on store shelves tomorrow. 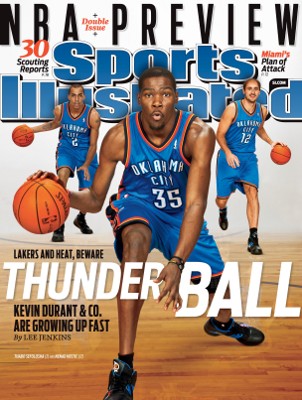