That was pretty horrendous.  After being up 14 at half, and over 20 at one point, the Sixers were outscored 60-39 in the second half to lose by 7.  Despite making almost half of their shots, Eddie Jordan's boys were undone by horrible free throw shooting, too many turnovers, and a complete defensive breakdown in the final two frames.  Here's what pissed me off the most: 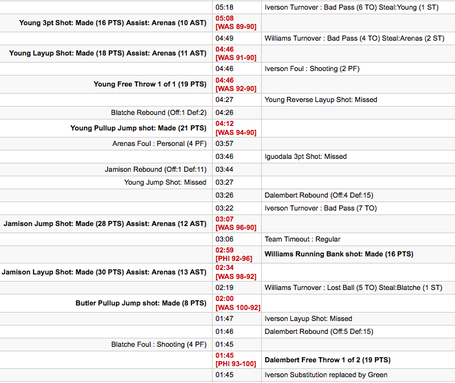 This is the play-by-play (courtesy of nba.com) of the 3:33 in the 4th quarter during which Eddie Jordan put a backcourt of Allen Iverson and Louis Williams on the floor to defend against Gilbert Arenas and Nick Young.  Gilbert (6'4) on Lou (6'1) is not remotely in our favor to begin with.  But Allen Iverson is 5'11 on a good day.  And Nick Young is a dynamic scorer that should be starting somewhere, standing at a mean 6 feet, 7 inches.  At least 8 inches on Iverson.  This is crunch time, and Eddie Jordan has an old, slow, defensive liability on a guy more than half a foot taller than him, who owns the Sixers.

Instead of putting in Elton Brand to cover Jamison, moving Thad onto Caron Butler, then Iguodala to Young, Jordan leaves Brand and the five shots he took this game on the bench, going with the worst defensive backcourt in history.  Dude, he's got it under control.  Don't sweat it.  Gimme your keys man, you're not driving tonight.  I know dude, just gimme your keys.

So anyway, Iverson (the savior of this team, this town, this economy, Darfur, and Christianity -- that's what I heard) stays on the court and lets up a quick 8 points to the swingman out of USC.  His teammates notice this and start to double on Young.  Nick makes the easy swing pass to Arenas, who finds an open Antawn Jamison two times in a row.  Next time, Iverson switches off on Caron Butler, who smiles, sips his Long Island Iced Tea, and proceeds to beat Iverson off the dribble and nail a midrange jumper with a smug grin on his face.  At this point, we're down 6 with a minute and a half to go.  (h)O-V-A.

I'm not gonna blame that on Iverson, because, let's be honest, what 5'11 34-year-old can guard a 6'7 guy ten years younger?  Don't answer that.  Nobody, that's who.  Eddie Jordan's awful in-game coaching directly handed us this loss, which, frankly, I'm okay losing after the fact because it means distancing ourselves from another awful team in the Wizards, and setting up for a higher draft pick.  It also means that (hopefully) Stefanski or someone with any brain waves will see how futile our current head coach is, and spur them to make some sort of change.  Unlikely.  Expect some sort of extension to come his way.

The result marred a truly phenomenal game from Samuel Dalembert (who?).  While, once again, our opponent was shorthanded, this time missing 7'0 rock Brendan Haywood in the middle, Sam took care of business against Fabricio Oberto, Andray Blatche, JaVale McGee, and my mom to the tune of a 20-20 game.  This Dwight Howard impression was only the second time in his career to reach such a feat, the first against Chicago on 1/11/08.  We lost that game as well.  In all honesty, I was very impressed with him tonight, albeit against weaker opposition, but he was efficient, didn't turn the ball over, and played within himself on the offensive end.  He hasn't been bad lately (with the exception of the 19 minute foul out), and I'm praying this results in a trade deadline deal with some sad, sorry, disillusioned team.  But tonight, good for Sammy.

I'm growing increasingly worried about Thaddeus Young.  He hasn't had a good overall game in almost 3 weeks, and has been downright awful since his 20 point performance in the loss against Utah.  Hopefully he gets it together (Get it together!  Anybody play Fusion Frenzy?)  and strings a few good games together so we get some faith back in the young kid.  Remember folks, he is just 21.  I'd personally like to see him go back to the small forward, but I'm sure continuing to change his role in the offense and what he should focus on both ends won't mess with his development, so you know what, keep doing what you're doing Eddie Jordan.  He is a small forward.  Get over it.

On the heels of being renewed for the rest of the previously unguaranteed season, Allen Iverson played his worst game as a Sixer round 2, scoring only 4 points and turning the ball over 7 times in a 34 minute run.  Naturally, for an unproductive former star here only for sentimental value one season, he should get that many minutes.  That seems like a good call.  At least Jrue's psyche remains undamaged against Gilbert Arenas.  *Gun reference!*

Iguodala played great, limiting Caron Butler to only 8 points.  He also filled up the stat sheet again (yawn), with 20 points on 12 shots, along with 8 assists, 6 boards, and 4 steals.  I say we trade him for an expiring contract.  Does Keith Van Horn still get paid somewhere?  Maybe we can get him.

Jason Kapono is still god-awful, Speights rebounded well in a 12 minute run with a plus 10 +/-, and Jrue/Carney each hit a pretty three but then didn't do much else.  Lou Williams can score but can't play a lick of defense -- is this news?  Hopefully we can package him and a bulky contract to open up the starting role for Jrue and get an expiring deal, but trades don't happen so I'm talking out of my ass.

Well, that's all for me.  Enjoy JSams the rest of the week, as I will be trying to fit as much corned beef into my eye sockets that is needed to completely shield myself from watching Eddie Jordan pretend to coach.