Share All sharing options for: #5 on your draft board and #1 in your heart

This version of the LB Draft Player Preview concerns a young lad at Kansas who possesses two first names; which, bear in mind, is always a crowd pleaser.  Xavier (pronounced Zavi-eh) Henry originally committed to Memphis last year which would have paired him with some kid John Wall, ever heard of him (going from Memphis to Kentucky obviously), before departing for Kansas after John Calipari bolted.  Unfortunately he is not related to the famous French footballer Thierry Henry as many (or nobody) had previously speculated.  Henry's biggest accomplishment was of course being honored by the folks at this blog selecting him as the #5 most desirable player in this year's draft class.  Hopefully this little preview of Xavier will shine a light on this pretty miserable evening that saw our boys play as poor as you can and still win, thereby inching ever closer to not having a good lottery selection or one at all.

Learn more about our #5 stud after the jump.

With all the talk that John Wall is deservedly getting around the NBA community, there is still a freshman out there who can be an enormous impact on an NBA team next season and beyond.  The stand-out quality I noticed about Henry seeing him for the first time this year is his freakishly strong body for a shooting guard.  Coming in at 6'6" and 220 lbs, Xavier is the perfect build for an NBA player ready to contribute right away.  His best actual skill is his silky smooth jumper that comes with a release as quick as Chevy Chase's talk show was pulled off the air.  This kid has extensive range from the outside shooting 40.4% from three (currently 16th in the nation in 3-pointers per 40 mins) in his first and presumably only collegiate season.

His offensive game could become a dominant one in the NBA if he developed some type of post-up game as he will most definitely create match-up problems on the opposition bringing his size.  He currently averages about 3.5 FTA per game which should improve once he starts utilizing his superior strength in the paint.  So you're saying this guy already has a deadly shot and has the potential to power his defenders down low? Where do I sign? 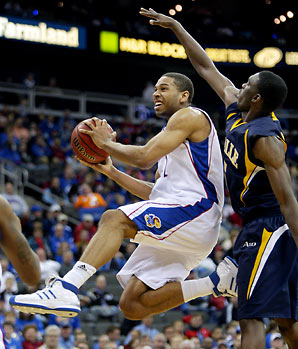 Now of course with the good comes the bad (or needs improvement to sound more positive!).  Xavier is not the quickest of available guards out there.  You won't see him blow past many defenders or defensively stick with quicker guards.  What he does lack in quickness, however, he makes up with in anticipation.  Henry averages about 2 steals a game because of his ability to play the passing lanes and read defenders.

Like our good friend Thad (excellent time to plug the LB store to get your "Rock Me Thaddeus" t-shirt), Henry struggles with his dribbling skills and relies too much on his left-hand.  On a positive note, his weaknesses are not things that can't be improved with experience and work ethic which is something that apparently Xavier has no problem with (maybe he will make Speights want to get better on D at the very least).

Xavier Henry is very high up on my list of hopeful picks trailing only Jimmy-John Wall,  Derrick Favors, and Evan Turner.  With the lingering feeling that Andre Iguodala will be shipped off in the coming weeks, Henry would certainly not be out of the question for this team's development (assuming there will be development of course).

Next Sunday (Feb 7) I'll be checking out Eddie Davis of UNC at the UNC/Maryland game so I'll let you all know my feelings about him after it.  Until then, here's to hoping for more ping-pong balls and an excellent start to the final season of LOST.